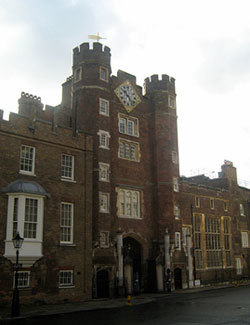 Image by wallyg from the Londonist Flickr pool
The Royals really are just like us, aren't they? After yesterday's news that the Queen will be broke by 2012 unless we give her more cash, we now hear that Princess Beatrice's St James' Palace apartments had a £250k overhaul when she started studying at Goldsmiths.

You might think the Princess turned her nose up at the thought of living in New Cross, but living in the palace was presented at the time as a jolly good idea actually, yah, because of the savings in security. Nobody mentioned the taxpayer funded redecoration though. Funny, that.

The apartments are described by a palace official as "very unimpressive... a small set of attic rooms reached only by a spiral staircase of 60 steps" and that the rooms had been due for refurbishment for a long time. Unimpressive? Really? Has this guy ever seen a truly unimpressive student flat? With the rats and the mould and the knackered heating? Alright, so English Heritage would have a fit if the palace were kitted out from Ikea, but it certainly puts the duck house in perspective.