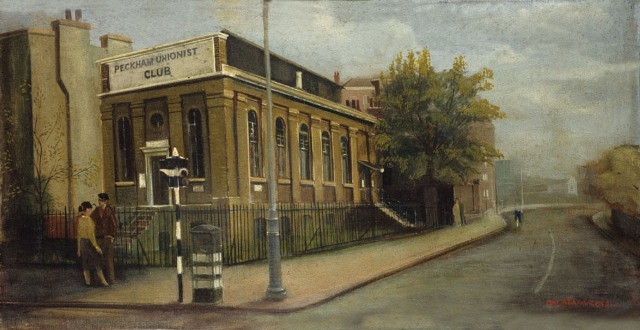 Situated on the corner of Commercial Road, the building was demolished in the 1960s and the site covered in residential properties. The artist is thought to be Tom Keating. This Lewisham artist tried to make a living as a painter in the 1950s but did not have great success. He discovered he could make more money forging old masters like Rembrandt and Samuel Palmer.

Comparing and contrasting past and present London is a compelling past time. It's why we did the Patterson Challenge, why we rootle after London folklore and why we prize local history resources. The Cuming Museum has tapped our geeky vein perfectly with its new exhibition, Lost Southwark, presenting the changing locales of the Borough in paintings, maps and photographs over the last 200 years.

Who'd have thought this grand old home for retired publicans was still standing in Asylum Road? See Dulwich Village pub, the Crown and Greyhound, in its former incarnation swarming with hunting dogs. Find out what Burgess Park once looked like, in the days when it was still a working canal shouldered by buildings leading to the Royal Surrey Docks, terminating at Camberwell Road with a spur to Canal Head on Peckham High Street. Now filled in, it's due for Boris's bonanza windfall - doubtless changing its landscape yet again.

Pictures are drawn from the Cuming Collection and the Southwark Art Collection and tell a wholly engrossing illustrated story of industrialisation, constant redevelopment and rapidly changing times as the Elephant outside the door awaits its own imminent transformation.

With the exhibition opening coinciding happily with the Story of London Festival, there's a series of talks throughout June & July to dig deeper into Southwark. Watch out for more musings on The Cuming Museum, starring as Museum of the Month in July.