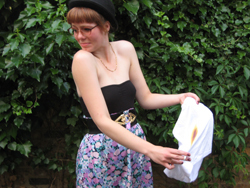 How to win friends and influence people.

These are difficult times for London's small businesses. In an uncertain economic climate, any new venture must have a unique selling point. One Londoner, Phil Watson of Easy Tiger Corp, has certainly met that criteria...

(Warning, the following interview may contain adult themes. And childish ones.)

Who are you, and what do you do?

My name is Phil and I run Easy Tiger Corp. We make Pre-Stained Underwear.

Pre-Stained Underwear. Underwear for men that has skid marks printed in them.

What the deuce? Why?

The idea behind our underwear is that when a woman catches you with dirty pants, it can be quite embarrassing, but if they're ours, you can just say you bought them that way and you're home free.

A logical fallacy, surely. If you're genuinely stained, you could claim this anyway without buying these pants. If you're wearing the fake stains, but are actually clean, you're unnecessarily invoking potential disgust. Please defend your assertion.

When you're wearing Easy Tiger underwear it's got the tiger logo on the crotch which says "I'm super confident and you know you want some of this sexy man action". The skid mark says, "I've got a sense of humour and I don't take myself too seriously" which women find hugely attractive. I bet you if you did a scientific study you'd find that people that wear Easy Tiger Underwear would get three times as much sexy time in one night. She (or he) wouldn't even let you go to sleep. By the end of it you would just be like "I'm going home, and I'm getting some ice. I think you broke it." If they were just regular old skiddy pants, I think you might have a little bit of a problem getting any action. They'd probably have holes in them too so your trousers would get checked and they would realise it was a lie because you'd stained those too.

I got my first repeat order this morning! We've only launched two weeks ago so I'm damn proud of that.

We have a pair with all three on the same garment. They're called "What The F*ck Happened To Me Last Night Underwear".

How do you get the fake stain onto the pants - and might it wash out?

Find a willing printer (harder than you might imagine). The hard bit about this is convincing people you are serious and you aren't taking the piss. The printing is no different then what you do when you get T-Shirts made up. The stain won't wash out, anymore than the skiddies in your regular undies will. Actually if anyone has found a good way of doing that, please get in touch.

What does your mum think of this?

I don't know. She won't return my calls.

Why are you called 'Easy Tiger Corp'?

It's called Easy Tiger, because when someone's losing their shit (pardon the pun) that's what you say to them. The Corp is so you know we're serious and we mean business. Also it shortens to ETC which I quite like.

I think you'll find if you go back and rearrange the letters some more that Easy Tiger Corp is very obviously an anagram for "Super Wicked Amazing Business Venture".

Ever considered taking this idea onto Dragons' Den?

I might, but I don't really need the extra investment. You don't really need an incredible amount of money to do something like this as long as you have good friends to help you out. My ex-girlfriend and my best friend did all the art work. My friend Paul's band Spindle and Wit are doing the modeling, with the help of my very sexy friend Morgan, and my cousin, a very talented photographer, is helping me fix the incredibly shit photos I took. So it's all worked out well and hasn't cost too much.

Ha ha nice! I once puked on the tube but I was making out with this chick, and so most of it went in her mouth and essentially she was the one who puked it up on the tube. Does that count?

So, is selling pre-soiled underwear a daft but brilliant business proposition that's sure to succeed on the back of its novelty, or is it merely an elaborate ruse to see how much exposure a dumb idea can get in this credulous world? Unleash your thoughts and abuse in the comments.