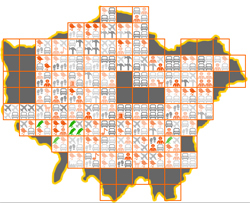 What does the capital sound like? The London Sound Survey offers hundreds of answers in the form of short audio files from every corner of the city. The sonic diversity is vast: a muezzin calls evening prayers in Whitechapel; ticket touts patrol the Wembley crowds; a car auction takes place in Deptford; and there's little but birdsong in far-away Hatch End. Here's the skinny:

London Sound Survey assumes that the everyday sounds of city life are significant, even though they may be taken for granted. They tell us about who lives here, what their aspirations are, how they enjoy themselves and what they believe in. They can take the form of fashions, from singing canaries and windchimes to boomboxes and car horns that played the first eight notes of 'Colonel Bogey'. They are shaped by developments in trade, industry and technology, by the growth of the city itself, and by demographic and social change. They announce shifts in the make-up and scattering of London's wildlife.

Case in point: the 'bloody parakeet squawking noises' indicated by the green birdies in the visualisation above.

There's even a section on the sound of London in days of yore. Although we'll never enjoy a recording of an 17th century market or the raucous din of a Georgian tap room, an archive of literary descriptions at least gives a flavour of the times.

The London Sound Survey is a beautifully crafted labour of love. All files are published under creative commons (non-commercial) license, and contributions are very welcome. We recommend you bookmark it now and spend an hour or two over the weekend luxuriating in the sounds of our city.