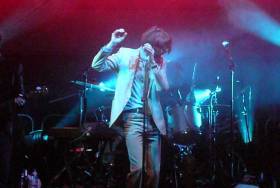 Last night, Jarvis Cocker played the stylish 1930s Art Deco Troxy venue in East London to promote his recently released second solo album, “Further Complications”. After receiving a less than enthusiastic reception for his latest album, he’s really got his work cut out for him as support act are The Horrors. Having originally (and unfairly) been written off as derivative garage rock Goths, The Horrors recent transformation into, err, shoegazing Goths with their second album “Primary Colours”, has seen them gain new fans and new respect as the press are clamouring to spoon praise upon them. Although they perform a great set, they are greeted with indifference from the audience, who are here to see one man, and one man only.

When Jarvis takes to the stage to massive cheers, suited and brandishing a cane, he gives of the air of a randy history teacher. Jarvis has still got the moves as he tears about the stage throwing his trademark shapes in front of an enraptured audience.

Although he acknowledges his approaching middle age in songs such as album highlight “Leftovers” (“Trapped in a body that is failing me, Well, please allow me to be succinct, I wanna love you whilst we both still have flesh upon our bones”), his libido shows no sign of waning on the dirty rock stomp of recent single “Angela”, a paean to a girl half his age.

The biggest cheers for the night are kept for the old favourites “Black Magic” and “Don’t Let Him Waste Your Time”. Unsurprisingly, there people hoping for Pulp classics (possibly buoyed by the presence of former Pulp band mate Steve Mackey on guitar), but Jarvis isn’t one to rely on past glories. Jarvis Cocker has always proved to be one of our most enigmatic front men, and tonight he stays true to form, a real national treasure.