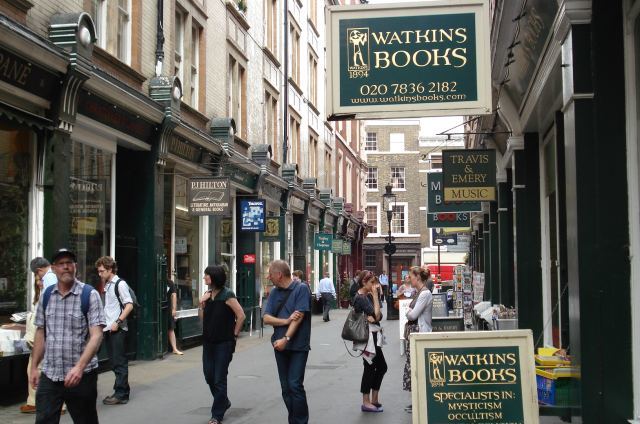 When we wandered in to investigate Cecil Court a couple of years ago we didn't really stop to look in the shops (we're busy people, things to do, people to see). But we thought it was time to remedy that - with knobs on.

Where Charing Cross Road used to be London's main bookish thoroughfare, rising rents have pushed many of the small independents out of business. Cecil Court is lucky enough to have a sympathetic landlord in Lord Salisbury; while he's not quite the "wealthy benefactor" that a passer-by was overheard (mis)informing his companion, he is keen to keep the street as the specialist book area it's been for over 100 years.

Cecil Court's narrow walkway and tall, Georgian buildings don't let much light into the shops and it was probably inevitable that booksellers would move in. The first Foyles opened here in 1904, and esoteric bookshop Watkins has been in the same spot since 1901. But the increase in business rates is hitting all small businesses hard, and Cecil Court is a loud part of the campaign for meaningful rate relief.

We'll be visiting just a few of the shops over the next few days and dispelling any timidity you might have about popping into rare book shops; look forward to a book worth £17,500, a contemporary Schubert score and a Dalek...

Cecil Court, WC2N. Map after the jump, images author's own. Know a good bookshop? Email us at londonist (@) gmail.com.

Pleasures of Past Times / Tim Bryars


View Biblio-Text in a larger map