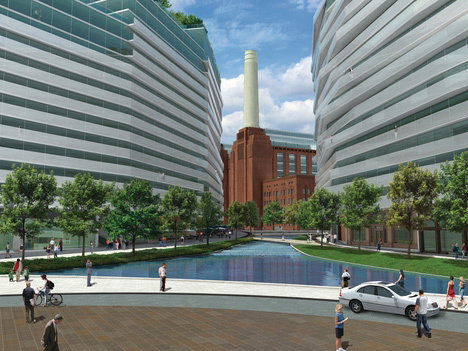 Given the rough ride he received for earlier Battersea Power Station plans (never mind the lukewarm reaction to the Walkie-Talkie tower), it's tempting to think Rafael Viñoly and his team have just thrown in the black terry-cloth towel on the project. That's probably the only way to understand the latest, lacklustre design for the crumbling riverside site.

With more ambitious plans cast aside because they might "spoil the view" from the Palace of Westminster, the new design turns low-rise, veiling the Victorian brickwork behind grey, monotonous blocks and randomly throwing in a few trees and water pools for a faux-bucolic effect. The remains of the Power Station itself is converted into the usual mix of offices, shops, housing and restaurants.

An underwhelming effort, then, but just another notch in the chimney-stack of pie-eyed ideas for the site. Over 25 years since it breathed its last fumes into the London fog, Battersea Power Station remains a blot in the copybook of countless developers and architects, and as yet another scheme is run through and rejected, the building's gradual decomposition will continue. Perhaps it should be this way, a symbol of the flaws and fallacies of our developmental strategies.

Or perhaps it really should be turned into the Batterseum, the highlight of the Super Contemporary exhibition.