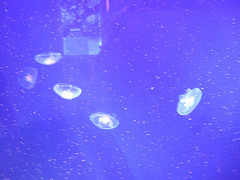 108. The Strange Case of the Flying Whatsit of Wimbledon!

When there's something strange, in your neighbourhood... who ya gonna call?

If ever there was a case of something weird resembling the green slimer from hit '80s movie 'Ghostbusters', then it was the 'thing' that flew over Wimbledon in January of this year. Now, tales of unidentified flying objects are numerous. I've even covered yarns pertaining to flying serpents over the capital. But pink jellyfish ?

The Wimbledon Guardian covered the downright weird story of the 9th of January, when a visitor to the paper stated quite categorically he'd seen a weird object over Merton.

I looked out of my flat window this morning... and to my surprise noticed a large bright pink jellyfish-looking object surrounded by a pink haze. It appeared to be hovering over or above the pylons in the distance.

The witness and the paper attempted to make some kind of connection between the object and the Merton Abbey turbine, at the shopping centre, especially when five days previous it was alleged that a 'UFO' had hit a turbine in Lincolnshire.

A spokesman for the centre however commented that no aliens or unusual flying creatures had been seen in the area, despite the fact that strange objects had indeed been seen over Wimbledon the previous year. Now, UFOs are one thing, but a pink jellyfish really takes the biscuit doesn't it? Well, no in fact. Cryptozoologists, who scour the world looking for peculiar animals, have believed in 'sky serpents' for many years. Such forms are rarely seen by the naked eye but often appear on video when frames are slowed down. Such flying 'creatures' (also known as 'rods') may well explain some UFO reports, but in fact be something of animal form but unknown to science.

A similar jellyfish was seen over Kent a few years ago, and many tales of such critters exist in folklore books from all over the world, dating back centuries.