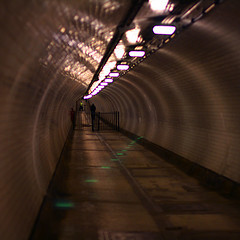 Image by Che-burashka
Things are afoot in hidden arches underneath Waterloo station. Tunnel 228, named for an abandoned British Rail throughfare only recently re-discovered, is the venue for a one-off art installation under the auspices of Kevin Spacey's Old Vic.

Inspired by the chthonic set in Fritz Lang's Metropolis, the installation, which runs from tomorrow for 15 days, see visitors donning flu masks (a serendipitous touch, given the project's been planned for months), and wandering through the warren of tunnels, interacting with performers playing characters who "live" on the above-ground world. The space has also been filled with a series of artworks, including a paper forest and attendant paper moths, and, in a nod to the cinematic source material, workers slumped over tables.

If it sounds a little familiar, it's probably because the theatrics have been coordinated by Punchdrunk, the folk who did 2007's hugely successful Masque of the Red Death, which we were quite enamoured with.

Tickets to the show are free, but must be booked in advance, and we suggest you get your skates on — they're disappearing rapidly. Reserve them at the show's atmospheric website, which also has directions on where to find the tunnel. If you do miss out, there's hope yet — the council are considering a return in the autumn.

Tunnel 228, May 8th - 23, under Waterloo station. Entry is free via pre-booked reservation.