Buy Yourself A London Transport Icon 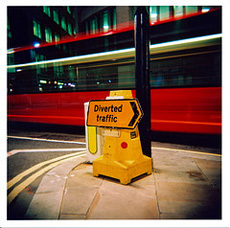 Image by Lady Vervaine
Just think, in decades to come we'll all be waxing lyrical to our kids about the bendy bus. Campaigns to bring the articulated icons back will be launched, and Travis Elborough will write a sequel to his Routemaster paean extolling the virtues of those loveable low-slung street crawlers.

The great bendy rollback begins in just a few weeks, as the 507 and 521 "Red Arrow" routes revert to single-decker mundanity. But what to do with the stock of bendies that will shortly be taking up valuable garage space? Well, the company that leases the fleet to TfL is already making plans: they've started advertising the second-hand vehicles in the trade press.

Describing them as "popular with passengers and operators in over a dozen cities" (London presumably not being among that number), the company hopes to get at least £70,000 for each one, which for a fleet of unwieldy, 58-foot vehicles that have seen a heavy seven years of active service, is a pretty silly sum.

We've got a much better idea on how they can be re-purposed. Hiring out a stretch limo used to be the perfect start to any hen night or birthday bash, but in these times of credit crunchiness, it seems a bit excessive. If TfL have any sense, they'll market the superannuated vehicles as the ideal choice for a cheapo chauffeured late-night booze cruise through the capital's streets.