A blogging paramedic this week, who's posts on his day-to-day experiences working for the London Ambulance Service in Central London. 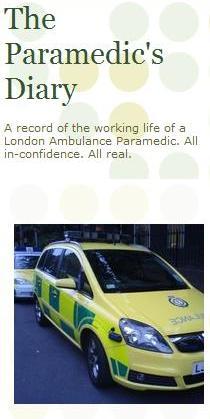 The real-life diary of a professional frontline paramedic, working in London.

How and why did you start blogging? What about London inspires your blog?

I started because I love writing and thought I had something to say of interest. I started in April 2006 on AOL then moved to blogspot and have been there ever since. Working in London means that I always have something interesting to say; its a vibrant and exciting place where nothing stays still for too long.

What's the worst thing about your job? And the best?

The worst thing about my job is dealing with time-wasters (especially drunk people) and hoax calls. The best thing is the buzz you get when you save a life or change one becuase you've done a good job.

Is it getting better or worse for the profession? What would be the single best improvement London could make to your job?

It's getting worse in terms of call volume - too many people call ambulances when they don't really need one. The abuse and violence against us is increasing too. But it's improving too because we have lots of new recruits coming in and we are still getting the job done for Londoners.

London could improve our job by educating Londoners about when to call 999 and not to abuse us.

Swine Flu isn't causing too many problems yet but it will and mainly because the Press have over-rated it and people tend to panic. Normal Winter Flu kills many more people every year than this one has! If we get too many calls from people with Swine Flu (or who think they have it) then we will find it difficult to serve the genuinely ill and injured of London.

Would you feel more connected to London, or missed out on things without your blog?

The blog definitely connects me to London and the rest of the world and yes, I have considered stopping it because it takes up a lot of my time but I would feel disconnected from my readers, many of whom are in London.

And for some general London chat...Where do you live and why do you love it?

I live in Hertfordshire and I love the area I live in because it's quiet. I would like to live in London but can't afford to!

I have many favourite places in London but I love the West End most.

What do you know about London that noone else does

I guess some people know some things about London and some people know a LOT so I don't know if what I know is unique but The actual Old Curiosity Shop, as written about by Dickens, is still intact and is nestled among modern buildings just off Lincolns Inn Fields. Oh, and Charing Cross actually comes from the French term Cher Reign because a cross was placed in this spot for a queen by a doting King (whose name I've forgotten!)

Nope. Never been sick on the tube but the 1980's programme 'The Tube' used to make me feel nauseous!

I am married and we have a new child on the way. We also have a mad cat at home called Scruffs, who is also well known via the blog and has a little fan base of his own! :-)