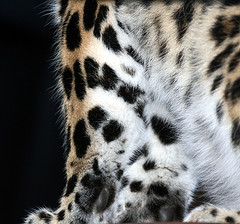 Photo by law_keven on flickr.
102. African Big Cats In London?

For more than twenty years I have researched sightings of mystery animals across London, Kent and Sussex. I am the UK's only full-time 'big cat' researcher. And yet never, in all my moments of collating evidence, going out in the field and appealing for eye-witness reports, have I ever come across a report of a normal 'spotted' leopard. Until now...

Despite sightings of black leopard (the same as the 'spotted' leopard except it has a dark pigment to the coat), puma and lynx across London and the outskirts, the capital is not exactly 'big cat' country - although I've often written tales on the 'beast of Bexley', the 'Surrey puma', the 'Golders Green lynx', and other sightings from Abbey Wood, Southwark and Bromley.

During the week commencing 16th March, a Peckham Rye resident contacted local press to report, "Just walking my two dogs late this evening when one of them started acting really strangely near the back of the garden area. Then something came out of the shrubs and started to walk across the path into the picnic area. At first I thought it was a fox, then realised that it was actually bigger than my dog, which is a young Labrador."

He continued: "...its tail was long and thin, curling up over its back and it had sandy-coloured fur with a leopard patching. It dawned on me that this was some kind of wild cat... then, seconds later a second one, smaller, appeared alongside it and they both turned and headed up the path and towards the wooded area."

As reports of non-melanistic leopards are non-existent across the south, maybe the witness saw a lynx, although such animals have shortish tails, but do have mottled markings. Until of course, more people come forward to report these 'leopards', such a sighting can only be filed.

More can be found out about 'cats around the capital' in my new book, 'Mystery Animals of Kent', available from Amazon.