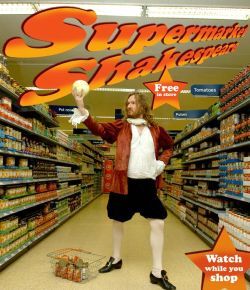 Teatro Vivo, last seen steaming up windows of the Horniman museum's glasshouse with Hothouse are back in the fresh fruit aisles of south London's supermarkets with Supermarket Shakespeare, this time inspired by Sonnet 91.

We sped into Lee Green Sainsbury's, grabbed a basket and looked for actors plus 2 for 1 offers. Rounding a corner, we saw a buxom wench with tweedy husband arguing by the deli counter, not in Shakespearean verse but the normal, muttered vehemence all arguing couples adopt while shopping. Suddenly remembering to buy mouthwash, we veered off to the pharmacy and walked straight into a touching reconciliation between a young man anda young lady. Everywhere we looked, there was a scene unfolding - and all of them seemed to be part of the performance. This little gem of a theatre experience rendered every shopper a likely character, about to launch into a conversation, drawing us into their fictional lives.

There are several cycles in the hour-long performance, allowing you to follow each set of characters around the shop. And even though you can shop at the same time, we doubt you'll want to split from the very engaging actors and their lovelorn plights; you'll be called upon for relationship advice while looking for toilet rolls. And you can't tell which staff are actors too, as the PA announcements seem to be in sonnet form... When the performance was over, we carried on strolling the aisles, picking up things for dinner, and secretly hoping some more drama would break out by the deli counter.

Supermarket Shakespeare is at Lee Green Sainsbury's until Sunday 26 April, then at Forest Hill Sainsbury's until 3 May. And there's a special offer on skinless chicken breasts, going for £5 per pack of four at the moment.