Prince Charles To Lecture At RIBA 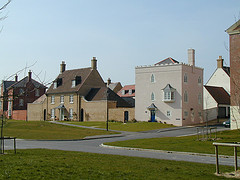 Poundbury by MarilynJane
Given the date we were very dubious about this one, but it appears to be true: the next in line to the throne, a man well known for his particular views on the nation's built environment, will impart his questionable wisdom at the Royal Institute for British Architecture next month, on the subject of sustainable development.

This isn't the first time the Prince of Wales has spoken at RIBA; the last occasion was in 1984, when he made the notorious observation that the (never built) new wing of the National Gallery resembled a "monstrous carbuncle on the face of a much-loved and elegant friend". Since that point Charles has carved out a niche with combative, if generally clueless, criticism of modern architecture, while playing with his own model train set in the form of his pet project, Poundbury, a twee, sterile Dorset new town that resembles a Regency theme park.

In a spot of unfortunate timing, the announcement of his RIBA lecture comes in the same week that the first building actually designed by the Prince himself, a fire station in Poundbury, was unveiled to general bemusement, with one critic describing it as "the Parthenon meets Brookside" and likening Charles' architectural follies to those of Mussolini and Kim Jong Il. Ouch.

The Prince's pontificating will take place on May 12, and RIBA members can apply for tickets here.