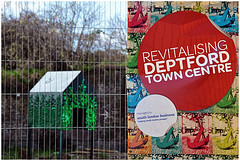 Image by Manuel.A.69
Not convinced by the Guardian-endorsed "cool" Dalston? A foreign broadsheet has swung it's mighty stamp of approval on another London burg: Deptford. In a piece for its Travel section, the New York Times made the surprising claim that the south-east London spot, and nearby New Cross, are "hip".

As supporting evidence, they highlight boozer-turned-boho pub the Amersham Arms, converted train-carriage cafe the Deptford Project, and hipster hole the Royal Albert as choice locations for the skinny-jean crowd in what they describe, geographical considerations be damned, as "London's Wild West". Just for good measure, they bung in A.J. Goddard on the high street, a stalwart pie 'n mash shop, as a "must-see".

The Telegraph packed off a journo off down SE8 for local reaction, which can mostly be described as 'bemused'. Said one local barmaid, undoing years of tourism office crack-papering: "All I can say is I hope they like hoodies, muggers and junkies". Even a local councillor tempered her enthusiasm by calling the piece "a bit bizarre". Before they book their flights, American cool-hunters might first want to catch a few episodes of the excellent BBC2 documentary The Tower, which captures the schizophrenic nature of modern Deptford as gentrification begins to wash up on its shores.