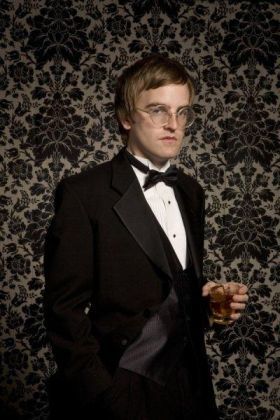 Everyone seems to love a ukulele at the moment. Not only do we have The Ukulele Orchestra of Great Britain, there’s jam sessions in West End pubs, and we even have Ukulele Karaoke.

These ukulele loving times are the perfect opportunity for Dent May, Mississippi’s own ambassador of the four stringed miniature guitar, to head across the Atlantic to promote his debut album “The Good Feeling Music of Dent May & His Magnificent Ukulele”. Although he sounds like he may be an novelty act, don’t dismiss as he couldn’t have a more credible pedigree - he’s just been opening for band of the moment, Animal Collective, who discovered him during the recording of their album of the year contender, “Post Merriweather Pavilion”, and signed him to their Paw Tracks label.

Taking to the cramped stage upstairs at Clerkenwell’s Betsey Trotwood on Friday night, Dent May couldn’t be more different to the experimental psychedelic folk of his Animal Collective friends, with his crooning style, humorous lyrics and hook laden melodies having far more in common with the eccentric pop of The Magnetic Fields and Jens Lekman. The mild mannered May charms the crowd effortlessly with future classics “Oh Paris!”, the sun drenched “Meet Me In The Garden” and an unexpected cover of Prince’s “When You Were Mine”, and it’s evident that despite his small instrument he is a man with a huge talent

Don’t miss your chance to experience Dent May’s good feeling music when he’s back in London playing Stoke Newington’s Bardens Boudoir on April 12th as part of the Bird on a Wire Festival. Tickets are available here.