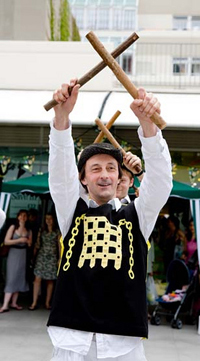 It's the height of spring, the eve of May; when morris men come out to play. The biggest gathering in the morrising calendar approacheth. On Saturday 9 May, 160 of the country's finest practitioners will roam the streets of Westminster, with only one thing on their mind: dancing! We spoke to Jason B Standing of the Westminster Morris Men about this most unusual of traditions.

So, morris dancing. It's all a bit silly, isn't it?

Many things in life are. Paying £80 to watch a bunch of nylon-clad millionaires chase a ball up and down a bit of grass for an hour and a half sounds silly too, but that doesn't stop people claiming it's socially important. Having said that, I must admit I do think it can be a bit silly, yes,

but that's part of the fun of it.

Do you get tired of such cynicism and all the jokes?

From what I can see it's a case of morris dancing being an easy stereotype to get a cheap laugh from, and because it's primarily performed by white able-bodied straight males there's no lobby group around to cause a fuss about it. We generally find that once people get over their "Ho ho, look, morris dancers" reaction they can see that what we're doing is a practiced performance with a lot of care and attention to accuracy, and we get many compliments and regular fans as a result of that.

It's a really obvious question, and we're sorry for that, but who or what was Morris?

That's been fairly unclear since 1448, from what I'm told - there are all sorts of theories on that (and the saying goes "Ask 6 morris dancers where it originated from and you'll be guaranteed at least 8 answers"). However, the popular interpretation in our team is that 'morris' derives from 'mores', meaning customs. So presumably it's just some other way of saying folk dance. That's not a particularly newsworthy answer, is it?

No, but it's good enough for us. But moving on...both folklore and dancing in general seem to be resurgent at the moment. Have you seen any signs of Morris Dancing gaining popularity?

Since taking on the role of team Bagman (kind of like a secretary) I've been quite surprised at just how popular morris dancing is - we get up to 20 emails every week inquiring about whether we can come and dance at functions and events that people are running. I think the English are genuinely quite interested in morris dancing, once you get past that ridiculous preconception that it's embarrassing and effeminate. Nearly everyone who actually watches what's going on

(after they've finished shouting "Which one's Morris?") is surprised at what an enjoyable and high standard of performance it can be.

Is it really all white men with beards, or would we be surprised at the true demographic?

Well our team's all men, because it's a mens' team - in the same way that you'd have mens', womens' or mixed hockey or football teams. I read recently that there are more people doing morris dancing now than there ever have been, with mens', womens' & mixed sides in the USA,

Australia, New Zealand, The Netherlands, Denmark, as well as here in the UK. My experience is that most of the participants are white, which makes statistical sense as in 2001 most local authorities reported between 70 and 99.6% white populations. Everyone's welcome however.

Where do you get all your kit from?

Knitted from the beard of an elder morris man defeated in single combat.

When and where are the key London morris dancing events?

I think our event is the biggest annual morris event in London - always the 2nd Saturday in May (since 1953), this year with 160 morris men. Other than than that, there are teams turning up all over the place - there are morris teams in Borough, Camden, Westminster, Southwark,

Hammersmith, Blackheath, Wimbledon, Greenwich, Chingford, Enfield, Croydon, Lewisham, Walthamstow, Kingston and Watford, and probably more that I don't know about! You can keep track of where Westminster Morris Men are dancing out on

Has anyone invented 'extreme Morris Dancing' yet? You know, underwater, or on top of a mountain...the press love that sort of thing.

Absolutely! I've seen morris dancing in tiny, tiny pubs, in the Australian Outback, in swimming pools, in standing stone circles, with axes, with fire, and a jig involving what was pretty much man-to-man combat with beer trays. Actually you can see that one on YouTube.

If any readers fancy giving Morris Dancing a go, how should they get started?

The best things to do are either pop along to the Morris Sidefinder website, which will give you a list of the closest teams to you, or get in touch with us at Westminster via our website.

We love The Cardinal in Westminster because it's our local and The Gunmakers in Clerkenwell because of their consistently excellent beer - however there's no one particular central morris hangout as such. Hmm. Maybe I should buy a pub and rectify that.

Where's the most memorable London place/occasion that you've morrised at? (And is that even a proper verb?)

It's as good-a verb as any. I was pretty stoked when we performed in the grounds Lambeth Palace for the Archbishop of Canterbury... plus, performing in the middle of Trafalgar Square in front of a few thousand people was pretty cool.

Image by Jason B Standing.