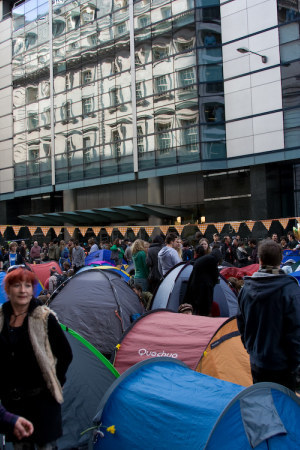 Tents, bunting and fluffiness at Climate Camp yesterday / image courtesy of Zaykoski from the Londonist Flickr pool
As predicted yesterday, police broke up the Climate Camp on Bishopsgate. Reader ohmyliver drew our attention to a film of riot police using shields to hit non-violent protesters with their arms in the air, although this film of protesters at Bank throwing barriers at police, and get baton charged in response, shows the differences in vibe at different points of the City. However, it was pretty obvious to anyone who went down to Climate Camp that it was peaceful and we question the use of police tactics in such a situation.

Protesters were also searched on the way out of the camp, and Indymedia reminds us that the UK Parliament Joint Committee on Human Rights recently expressed concern at police use of anti-terrorism legislation against peaceful protesters. There were also reports that police were trying to delete images from people's cameras using recent legislation that we highlighted in February.

The papers are leading with news that a demonstrator died after being found unconscious and not breathing at the Bank around 7.30pm last night (and that police and medics were attacked when they went in to help). There's no news yet on cause of death.

About 90 people were arrested by the end of yesterday for offences including possession of knives, violent disorder, burglary and arson. Most arrests happened towards the end of the day (at 9pm police were reporting 24 arrests) - did most of the trouble happen after people were released from the kettles? Which leads us back to the question we were pondering last night: does the use of kettles actually provoke, rather than defuse, violence by making people frustrated and ramping up confrontation? Or does the late night violence back up their use?

And while we're talking about kettles... the Telegraph reports that around 40 "'black bloc' anarchists" were intent on causing trouble at the Bank yesterday. Yet thousands of people were detained.

So that was yesterday. There's already been a giant game of monopoly outside the Stock Exchange (more police and press than protesters again) and riot police appear to be taking station outside the rampART social space in Whitechapel, which is running a cafe throughout the G20. Protesters are also planning a slow march from Bishopsgate to Bank in memory of the dead man from yesterday. Indymedia reports that Bank is "swarming with police" who are carrying out searches under Section 60 of the Criminal Justice & Public Order Act 1994. There's a smallish protest outside the ExCel centre as well.