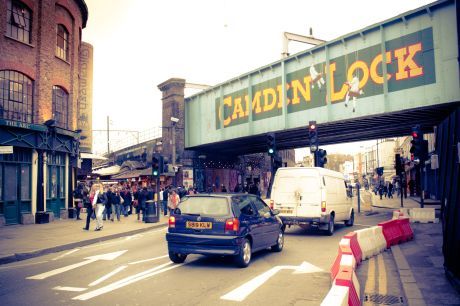 Saturday in Camden was much busier than Friday with queues trailing out of venues from the off. Don't forget that you can still download 65 free MP3s of artist who played the Crawl right here. Here's the ones we loved:

Has anyone ever been as hyped as Little Boots? Her debut single is out in a couple of weeks but her anointment as the 'Sound of 2009' by the BBC sent everyone blazing back in January. The pressure to deliver is so high that at this, her biggest UK gig to date, we can forgive her for not being perhaps as chatty as we've seen her before. Coupled with a crowd of mean looking indie boys all waiting for The Maccabees, it was always going to be hard to impress with the pure power pop 'Boots presents. But for those of us who don't get in a huff if there's no boy with a guitar on stage it was a tenori-on based insight into her much awaited debut album. 'Mathematics' and the epic 'Stuck On Repeat' will always be our favourites, but Phil Oakey duet 'Symmetry' and the commercial pop of 'Tune Into My Heart' make sure that Kylie should be watching her back.

Two thumbs up for jammy, poppy, funky electrolive with brassy riffs and chunky bass served up by a surprisingly bass-less quartet from Oxford. Two thumbs down for Cuban Bar's terrible space—with Morgan Quaintance of Does It Offend You, Yeah? fame fronting this tasty project, devoted Crawlers of all shapes and sizes pack the awkwardly long room while non-Crawling randos keep asking who they are. "Don't be afraid to move!" shouts Morgan. It's not that we're afraid, it's just that we have no elbow room. Still, a few get a couple of good pogos in while the rest of us are content sipping the complex blend of great groovin' smoothness punched up with crunchy bits of beat. (AS)

The queue trailing out the Stables entrance for highly popular electro-comedy performance troupe Datarock (these things are allowed in their native Norway) is a good sign that this is a band worth watching. Datarock, however, is not content with passive spectatorship—they demand almost as much from the audience as they put out, creating a wickedly exciting interactive experience, choreographing clapping, conducting sing-alongs, and generally masterminding the best party in town. The red tracksuited, aviatored, hairy-chested quartet seem to be having so much fun, everyone in the bar is hapless against their call to join in. Smokin' sax soloing, tambourine crowd surfing, four-man karaoke, and bartenders dancing on the bar ensue. They clearly love London ("We love you, London!"), and the crowd love them back ("WE WANT MORE!"). Come back, Datarock, and come back often. (AS)

King Creosote is Kenny Anderson, the man who helms Fife's Fence collective and purveyor of fine, keening folk. This isn't earnest beard-stroking though, and he comes across more like the clown prince of British alt.folk, a cheeky glint in the eye and a knowing sense of humour. He drops lines from You're The One That I Want into one song and later deadpans, "It's a folk festival, right? I mean you're all folkies at heart?". Nah, not really, but his misty-eyed folk can't fail to win over even the hardiest of Crawl souls. No One Had It Better from new album Flick The Vs builds to a beautifully bittersweet melodrama, Anderson repeating over and over its refrain "If you want this, you can have this, you'll let me go now". Switching between acoustic guitar and the gentle pull of an accordion, KC and his moonshine band are a subtle but alluring prospect. (AC)

Vincent Frank delivers what is likely the most earnest performance from an unabashedly pop artist in an overwhelmingly cynical festival. And well, the boy can sing, and the songs ain't half bad. But can we get him a haircut and a sense of irony, stat? The wholesome love songs have us wondering: is this Christian synth? Electro-Jesus? Props for the most ethnically diverse band of the weekend (black, white, Asian can jam in harmony!) and winning modesty from Vincent. Top 40 smash "Better Off As Two" closes an enjoyable if saccharine set with more of the dirty sound Frankmusik needs if he wants to crawl with the Camdenites. (AS)

Justin Hawkins of The Darkness leads what is hands-down the best half hour of the weekend. They sound studio-quality, with every soaring falsetto note and searing guitar solo finding its mark. They also sound exactly like the Darkness, which is exactly what the audience wants. Only these choice snippets from Hawkins' unfazed banter can begin to do the show justice: "There is a man in a one-piece trying to top the crowd." (Remarking on a sozzled serial crowdsurfer in a red jumpsuit who, at a distance, could be mistaken for a member of Datarock.) "No, you idiot, how are they going to see you if you're in there with them?" (Chastizing a disobedient member of the crowd who was meant to stand on stage shirtless.) "I think you know the rules about getting off the stage during Hot Leg." (In asking a woman to either leave the stage or remove her shirt, as per their rules.) "WE ARE HOT LEGGGGGG!" (In a song.) Why, oh why wasn't everyone here? (AS)

The Jazz Café throws up a grime double in the middle slots of the Saturday line-up. First up is Dizzee Rascal proteges Newham Generals, who are named after their local hospital and fittingly describe their debut album as "a heart attack". It might also explain lines like "only a doctor can save your... arse" from the creepy, staccato single Head Gets Mangled. Skittering beats pepper low-rider bassline in a late-night reboot of UK garage and drum'n'bass. The dual MCs' spit out lines in unison, a wordy flow that's fast, brooding and captivating. (AC)

Next on, Xrabit and DMG$ peddle similarly slippery grime, though with a Stateside egde this time. German-born, Dalston-dwelling producer Xrabit smashes Berlin electro beats with Miami bass to make something that could only have come out of East London. Meanwhile Texan rappers DMG$ (Damaged Goods, as they used to be in full) bring a little dirty South crunk to the party. Where the Newham boys were all about spinning out rhymes, DMG$ trade lines about fixing up to look sharp, party shout outs and call-and-response with the crowd. As they finally end up shirtless and pogo-ing in the middle of Xrabit's rave-up, the grime takeover's complete. (AC)

The Fall are stalwarts of these sort of festival lineups and you might expect everyone to have seen enough of them by now. But the large numbers of fans being turned away from the Electric Ballroom show that they are still a major draw, perhaps even more so in the post-Peer era. There's a definite curiosity value in Mark E. Smith's inimitable stage presence, half-way between inspirational preacher and rambling drunk. The relentlessly angular music itself is challenging though even for the initiated, the crowd tonight respectful though not lavish in their applause for Colonel Mark and his troops. Yet in the midst of the Camden circus of major label sleaze and next-big-thing hype, The Fall deserve some kind of award just for being so defiantly, uncommercially bonkers. (JD)