The Eccentric Club Brings Back Friday the 13th 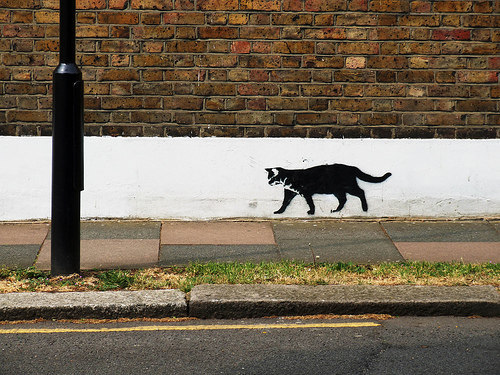 Bad luck courtesy of Ronald Hackston via the Londonist Flickrpool.

In times of turmoil and uncertainty, superstition holds free reign. But in London, one group has repeatedly risen up amid the finger-crossers and black-cat-dodgers to laugh in the face of Lady Luck. They are the Eccentrics, carrying on a tradition of 18th century scientific reason mixed with public spectacle.

Founded repeatedly in incarnations stretching back to the 1780s, the Eccentric Society took an interest in challenging superstitions and celebrated among its rituals the Friday the 13th Dinner, in which free-thinking members dined under ladders and held umbrellas and generally made of themselves lightning rods to bad luck. The last club was buried by the joyless club-hopping yuppies of the early 1980s, but in 2008 a new group of Eccentrics appeared to build the club once again under the patronage of no less than the Duke of Edinburgh. While they still lack premises, they're going ahead with the first Friday the 13th Dinner in decades this week at the Arts Club in Mayfair.

London loves nothing more than an eccentric and eccentrics love no city more than London, so we hail the return of the Club with enthusiasm and wish them the best of luck (or worst of luck?) with the dinner. We spoke with the Club Secretary, Imants von Wenden, for more information on this singular event.

How much documentation exists of the Club's dinners of the past? Have superstitions changed much over the centuries?

Not much, unfortunately. We have some literary evidence - a member known at the time as X.Y.Z. (in real life, a famous social and industrial figure of the Victorian era) has written a book "The Eccentric Club: Being a Short Outline of Its Past" (1880). According to the documents available to him (he was known as a collector of manuscripts), in 1780, when the Eccentric Society started (though the official Opening Ceremony was a year later, and then another one - in 1799 or 1800), the Committee consisted of 26 members (2X13) and there was a particular interest to challenging superstitions and investigating whether they have anything to do with the laws of nature. Figure 13 was one of them. X.Y.Z. writes: "It was quite in the way of the Council to take up such an investigation as this, for they had many different minds therein, who followed with interest the effects of natural law and superstition on human character and sentiments". There is no direct reference to the dinners on the 13th, but we came across some of it in the newspapers of the time describing parties dining on 13th of every month, or, particularly, on Friday the 13th, in parties of 13 per table, etc. Then there's many more articles in the Victorian press between 1882 and 1890 about the Thirteen Club which existed both in the UK and the US and was taking the idea of ridiculing and challenging superstitions to a new level: dining from coffin-shaped plates, etc. A bit too gothic and gruesome, too halloweenish, which is why the club was not particularly popular and was suffering some financial difficulties throughout its history. However, in 1890 Jack Harrison and a few accomplices revived the Eccentric Club and a few of the remaining Thirteens joined them and brought along their traditions which were by all means eccentric. The Eccentrics, which included many of the theatrical professionals, made a bit of a show out of the Dinner on Friday the 13th, though a very private show/party, normally limited to the members and a few invited guests only. Unfortunately, most of the Club's archives, including pictures, schedules and minutes, perished during the air raids of 1940-1942, so it's very hard to learn more about these dinners before the WWII. The Clubhouse in Ryder St, St James's, was so badly damaged that it was marked for demolition, but Lord Lonsdale, Club President at the time, managed to save and restore it. The present Club's Committee has recently managed to uncover (with great difficulty) copies of the lists of members of the Club between 1900 and 1930, which previously were considered lost, too.

As far as we are aware, the most popular superstitions related to this ceremonial dinner have been around for some good while and did not change much. Traditionally, all guests arriving to such a dinner would have to go under the ladder, look into a broken mirror, spill salt, open a black umbrella indoors, etc. Whilst we are planning to re-enact most of these things, we see this most importantly as a revival of an old tradition and a demonstration that collective positive thinking put together can raise good luck on any day of any week or month. It's all in our minds, after all. Actually, from what I have seen on the internet, some statistics show that Fridays 13th are even safer than other days as people are more aware of 'bad luck' around the corner and are more careful in everything they do.

Have there been significant cases of Club members encountering bad luck — or good luck, for that matter — after a dinner?

I have heard rumours of one of the members of the Eccentric Club in the 1930s winning a lottery a day after such a dinner. I also know that the American Thirteen Club was forced to close down in 1880s after one of its somewhat unstable members has committed a suicide on 13th of January (considering January as 13th month). But this was not bad luck, it was his ill mind.

Is it becoming more difficult to stand out as properly eccentric in the current century?

It is and, worst of all, there is gradual distortion of the very definition of who is really eccentric. I admit, in the past too, we could read about people 'slightly mad' being described as eccentrics, but these were extreme cases, too far to the other end of the spectrum. We tend to draw highly intelligent and creative, original and yet practical individuals, with some acknowledged achievements in literature, arts, science, law, fashion, music, business... We may have a few showmen who enjoy being in the spotlight of public attention, but they just compliment the rest, those who don't want to draw too much attention to themselves, who values their privacy. And, in most, cases do not consider themselves eccentrics at all, being wary of being branded as such and put in the same category with the 'attention seekers'. Another quote from XYZ, one of his characters in the book, a Committee member, says: "I'm afraid... that eccentricity may become fashionable. No body wants eccentricity a fashion - would not do. Want it natural. A man to be worthy of this Society should not know he has it himself. They say, I'm eccentric, I didn't know it. I'm the last man myself to believe I am eccentric. Still, I am told I am." - And this did not change much, either. Most of our members do not see themselves as eccentrics, but others perceive them that way. We have revived the Club which closed down in 1980s. In our opinion, it closed down, most of all, due to the fact that it consisted of people having no understanding of the meaning or the purpose of the Club. We feel closer to Jack Harrison, to Sir Charles Wyndham, to its originators in 1890 and 1780, than those who used it just as a social and business club which historically just happened to be called 'the Eccentric'. That is why Lord Montagu, the former President of the closed club and a true eccentric, supported us so much from the very beginning.

Many people try to research the phenomenon of eccentricity in the modern society and argue that never before has it (the Society) been so restrictive and unfree as today, most people are afraid of being ridiculed by the others just for being themselves. So there are fewer real eccentrics, but they exist and though many of them need no-one as a company, being introverts and sometimes too vulnerable and afraid of being misunderstood by the others, some, on the contrary, seek a company of understanding individuals, and some of them find us. We consider ourselves extremely lucky - we meet amazing people who seek our membership and whose company is something that we seek. If not for our Club, who knows, we could have never met them...

Who is, currently, the most eccentric person in London? Does the Mayor even rate a mention?

That we do not know, he is probably hiding somewhere with his books and hobbies behind the closed curtains and is not even on the internet, though this too may be just another stereotype, the real chap could be quite different!

There's sooo many varieties of the eccentrics in London alone! But on the 1st of April we are determined to consider some of the greatest eccentric characters nationwide and choose the winner of a title of 'The Greatest British Eccentric of the Year'. That will be a different event with a panel of judges headed by Lyndon Yorke, voted a number of times 'The Greatest British Eccentric', which I hope you may cover, too. There's quite a few candidates, as you can imagine.

Mayor of London seems to be too busy these days to allow himself to be the eccentrically charming chap he once was. But when he will turn up once for our Dinner, I'm sure, we'll reward him most eccentrically for such a courage.

Should we bring our own black cat to the dinner or will they be provided?

Regrettably, this time there will be no live black cats with us as we are just guests of the Arts Club in Dover Street, and, as far as I'm aware, no animals are allowed in there.