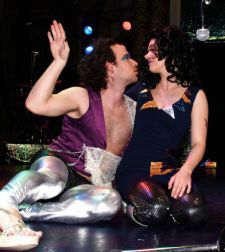 Wandering into a London theatre to be confronted by only 14 other people two minutes before curtain call is always a worrying sign. Maybe it's a hidden gem, we thought to ourselves. Warning: it is not a hidden gem.

'Blok Busta' is a brand new musical from TV scriptwriter and record producer Mike Bennett. Inspired by the glam music of the 70s, it tells the tale of a group of friends in the town of Glamsville who are terrorised by the serial killer Busta. His weapon? The power of disco music and a sprinkling of corn flakes (we have no idea). Aiming to be a farcical who-dunnit, the jokes come fast but more often than not create groans rather than laughs. Indeed the whole plot muddles its way from murder through schizophrenia, misogyny, threesomes before an overly intense and nonsensical ending.

Mixing actual glam hits such as Devilgate Drive, Ballroom Blitz and The Jean Genie with new compositions will go some way to satisfy a child of the day but few of the new songs excite. Al Howell's sweet duet with Delilah, 'Disco Dispair', is a rare highlight as is the later power pop of Kandy Girl's complete with dance routine and lesbian kiss.

In fact, it is only the lively nature of the young cast, who play all their own instruments, that manage to keep us in our seats for the duration. Ignoring a distracting performance from Susannah van den Berg as Tiger Feet and a whopper of a bad note from Mikey O'Connor's Inspector Stone, the real delight is newcomer Clare Kinson who takes on the duel roles of perky teenager Delilah and saucy policewoman Jean Jeanie. One to keep an eye on.

Blok Busta continues at the New Players Theatre, Villiers Street until April 18 with tickets at £20.