Preview: The Phantom Band and De Rosa at The Luminaire tomorrow

By Marv Last edited 165 months ago
Marv Preview: The Phantom Band and De Rosa at The Luminaire tomorrow 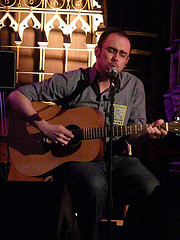 Assuming G20 protestors don’t bring the whole city to a standstill, Chemikal Underground take over Kilburn’s Luminaire for a showcase of the label’s finest tomorrow night. Headlining the night is one of the most talked about bands of the year, The Phantom Band, who are promoting their critically acclaimed debut album “Checkmate Savage”. Featuring ex-Delgado, Paul Savage, The Phantom Band’s sound is an eclectic mix of folk post-rock and Krautrock and past gigs have seen them perform with a Stairmaster onstage, so expect more than a hint of strangeness from their set.

Main support is provided by Lanarkshire’s stunning yet heinously overlooked De Rosa. Seeking inspirations from unusual sources, such as a mining accident in 1910 for “Hattonrigg Pit Disaster”, songwriter Martin Henry has a very distinctive lyrical style which sets them apart from the their peers and should appeal to fans of The Delgados, Arab Strap and Mogwai. Expect to hear plenty of songs from their highly praised second album, “Prevention”, released earlier this month.

Also playing are France’s Angil & the Hiddentracks. Tickets cost £8.00 and are available here.