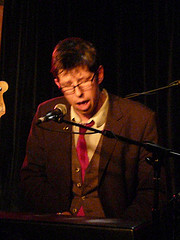 One of London’s best kept song writing secrets, Darren Hayman has carved himself a position of one of the keenest observers of suburban minutiae over the past 13 years under various guises such as cult heroes Hefner (self proclaimed “Britain’s Largest Small Band”) and The French. Increasingly prolific with age, he’s currently promoting his tenth album, ‘Pram Town’, which features contributions from Londonist favourites, The Wave Pictures.

Billed as a “folk opera”, it is a concept album about the Essex new town, Harlow, but don’t let that alarm you too much. Although it features a central narrative based on a character trying to escape the characterless confines of the town, this is a collection of folk-tinged songs that are equally humorous and touching, dealing with Darren’s trademark themes of love and yearning.

Tickets are £7.00 in advance and can be bought here.