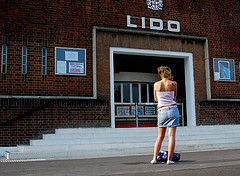 By Herschell Hershey
Whilst we disagreed that cost was the only barrier to swimming last year we can't help but feel the tug of the green eyed monster that from tomorrow, Freedom Pass holders not only get to swan around town for nothing, they get to swim around it gratis too. Under 16s - and in Hackney, under 18s - can also take to the waters for nothing, with a little bit of pre-registering bureaucracy.

Swim4Life participating pools are being pumped pounds to provide pay-free plashing but also to improve their premises so there's some kind of payoff for us post-adolescent, pre-pensioner peoples who still have to pay. There's no guarantee the scheme will last beyond 2011 though, despite DCMS's aspirations for an Olympic legacy of free swimming for all - which has been watered down to a vaguely achievable "2 million people more active" by 2012 - so piddlers and pensioners make like porpoises while you can.