Olympic Legacy: Swimming Will Save Us

By Lindsey Last edited 176 months ago
Lindsey Olympic Legacy: Swimming Will Save Us 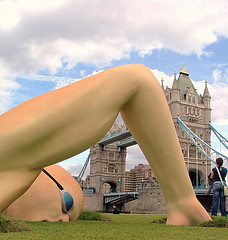 The DCMS finally launched a 2012 Legacy Action Plan today. State sponsored swimming is the central thrust, the headline catching whiz of an idea that's made the news.

By 2012, it's planned that all local authority swimming baths will be free to use, starting soon with the over 60s, then the under 16s and rolling out to all comers by the time the Games begin. £140m is going to local authorities to scrap swimming charges for OAPs and invest in their facilities in the next year.

If somebody is currently inactive, it's the most likely sport they're going to do. But unlike other sports, swimming has a barrier in its way and it's called an entry charge.

We disagree. Whilst we're a big fan of swimming, outdoors especially, there are more barriers than an entry charge. He's conveniently forgetting the humiliation of public changing rooms, swimming costume fear, rampant unruly body hair, verruca anxiety, underwater perving, getting your hair wet and hating swimming hats. To name just a few. Still, Tessa Jowell reckons up to 10 million people will benefit from this scheme alone and she "hopes" the government can deliver free swimming by 2012. We won't hold our breath then.

In other pledges, £7m is going into schemes to encourage people to walk and £75 million will be spent on "a targeted social marketing programme to support parents in changing children’s diet and increasing levels of physical activity." We're not sure what this latter actually means but it feels rather like shedloads of cash being thrown at getting people to walk, the most natural form of exercise in the world and telling them how to parent.

So let's focus on the swimming. Yay! And not dwell too long on the fact that Londoners' sceptisicm about the Olympic legacy may have been well founded.