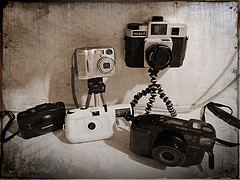 Camera arsenal by buckaroo kid
Outside the capital, one of Britain's best museums is the National Media Museum — a fine institution, but one that requires a trip to Bradford. From 2011, though, a visit won't require anything more than a ticket to South Kensington, as the NMM plans to open a satellite space in the Science Museum.

Having spent numerous years looking for a London venue without much success, an (unconfirmed) report in the British Journal of Photography claims that the NMM has finally come to a deal that will see it allotted three dedicated exhibition spaces within the Science Museum. Assuming that the plan receives the go-ahead from the Department for Culture, Media and Sport, the museum will begin the hunt for a creative director.

With the recently-relocated Photographer's Gallery planning to develop its new building and double their exhibition space, the next few years should help to further establish photography's place on London's cultural map.