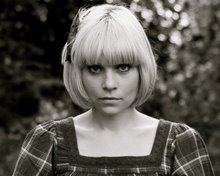 By attending a Hafdis Huld gig, you're actually getting a 2-for-1 deal: Hafdis makes wonderful folky pop music, but she's also funnier than any comedian we've seen recently. Her charming, childlike personality is reminiscent of fellow Icelander Björk, but where Björk's music is too obscure and abstract for some, and her character a little too intense, Hafdis' songs are as infectious and adorable as she is.

Hafdis is well-known back home as a former member of Gus Gus, a group which also featured fellow Icelandic star Emilíana Torrini, and she'll be recognised by any FC Kahuna fans as the singer of their biggest hit, Hayling. Her solo work has a much poppier sound, but so far hasn't gained any commercial success outside of Iceland, where her debut was heralded Best Pop Album in 2006.

On Wednesday night she headlined the Electroacoustic night at Clerkenwell's The Slaughtered Lamb, a trendy bar with a basement music venue. It was certainly one of the cosiest gigs we've been to, with comfy sofas creating a relaxed, friendly atmosphere, added to by Hafdis' cheerful banter with her band and the audience between songs. Most songs came with a story to explain them, and every tale was hilarious and endearing, even when they made very little sense. We concluded that everything sounds better in an Icelandic accent.

As for the songs themselves, half were from her first album (including her cutesy cover of Lou Reed's ‘Who Loves the Sun’), and the rest will appear on its follow-up. One new track told of Hafdis' discovery, on moving to England, that perfume should not be bought from a £1 shop, and another considered the difficulties faced by a man who can walk up walls. To hear these stories in full, you can see Hafdis for yourself at her forthcoming London gigs on April 13th (Source Below) and 25th (Blow Up Club).