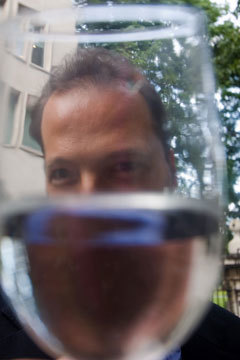 Meet with Peter Harden (one half of the mastermind brothers behind the handy dandy Harden’s restaurant guides) and there’s a good chance you’ll be treated to an insightful and entertaining lesson in the history of restaurants  or of Brits and our relationship with food (compared to that of, say, the French)  or pretty much any food-or-drink related topic that you may wish to learn about. Peter’s encyclopaedic knowledge of all things culinary is inspiring to say the least. Here’s our interview with him.

How long have your guidebooks been around?

What was the inspiration for your guides?

In the late '80s, I used to work in New York and my brother Richard used to work in Dusseldorf. At that time, both cities had recently seen the launch of handy pocket restaurant guides based on feedback from "real" people via a survey. London was lacking anything similar. I was looking to move back to London and my brother suggested we had a go at plugging the gap we perceived in the local market.

How are the Harden's Guides different than other restaurant guidebooks?

"Traditionally" restaurant guides have been based on salaried inspectors who visit restaurants anonymously and evaluate and review places based on a house set of guidelines and criteria. This is how Michelin, the AA and Time Out operate (and also, to a large extent, how The Good Food Guide operates, although they do also incorporate user-feedback).

Our guides are survey-driven, meaning that the ratings and reviews they contain are statistically derived from our annual survey of 1000s of interested foodies. Although my brother Richard and I have been to many of the restaurants ourselves — anonymously and at our own expense — this is just to inform our analysis of the survey (and to allow us to review new restaurants on our website), rather than to over-ride what the survey has to say. It also helps us prevent "ballot stuffs".

How does the Harden's rating system and survey work? How many participants contribute to each edition of your London and UK guides?

Each year via our mailing list and website we invite anyone who is interested to complete our survey form. This asks for nominations and ratings in categories such as "Best meal of the year", "Top cheap & cheerful", "Best pub", etc. Typically about 8,000 people contribute an average of over 10 reviews each (so over 80,000 in total). We statistically analyse these nominations and ratings, which form the basis of our write-ups.

How would you compare the London dining scene to that of the whole of the UK? To the rest of Europe?

There's no comparison — whatever the odd disgruntled provincial foodie may say — between the London dining scene and that outside the capital. More interesting restaurants open in London in any one year than in the whole of the rest of the country put together. It's not even close.

As compared to Europe and in particular major centres in France, Spain and Italy, London's weakness has always been quality particularly when it comes to cheaper restaurants serving traditional food. If it still exists, however, the gap has narrowed in this respect dramatically. And when it comes to variety — and in particular the availability of excellent Asian and Indian restaurants — London blasts all its European peers into a cocked hat.

Do you give much credence to Michelin Stars and other rating systems?

As long as a celebrity chef is not involved, and you're looking for a swanky joint, Michelin Stars are pretty reliable — indeed if you do a numerical analysis of their system compared to ours they typically yield similar answers. But only about 10% of restaurants in the Michelin guide — invariably the more expensive ones — have a star and their non-starred inclusions usually come with very little meaningful information about how good they are. In fact, the knife & fork symbols they give stand for how comfortable a restaurant is — only the French would do something so bizarre! Another issue with Michelin is — as we recently pointed out in an article for the Financial Times — that their awards to restaurants owned by celebrity chefs, particularly French ones, seem to be un-justifiably generous. We suspect this has much to do with generating publicity for the guide (which does after all exist primarily to make Michelin tyres more sexy).

As for other rating systems, some are better than others, and good ones are surprisingly rare. Time Out, for instance, publishes a guide we respect greatly, but its rating system is its worst feature.

Our guide is very akin to the UGC sites, in that we canvas feedback from anyone who's interested enough to participate. The main difference between our site and "pure" UGC sites is that we analyse and editorialise the feedback.

What we hear from people who prefer our site over pure UGC ones is that you don't have to sift through tons of conflicting reviews, because we've done all that for you and summarised the important conclusions. Also the fact that the feedback is monitored by people who know the restaurant scene well helps weed out restaurateurs trying to stuff the ballot.

Any tips on how to choose the right London restaurant for the right occasion?

Use our guide or website of course!! But seriously folks, I think the most important thing when selecting a restaurant is to remember that they are about much more than just food, and to think about exactly what vibes you want to set up for this particular occasion. If it's a date, a business meeting or somewhere for a get-together of some kind, it has to be somewhere that will put everyone at ease. Few people select a restaurant for its good service, yet actually how well treated you are by the staff sets the whole tone for the event. If no-one's that interested when you're booking, maybe think of going somewhere else. Once you've made your booking, if it's someone you're trying to impress, get hold of the wine list ahead of time so when your big moment comes you don't panic and just order the first thing that grabs your attention whatever the cost

What's the future hold for Harden's?

We'll always love our books, but the web, mobile and whatever else the electronics giants have up their sleeves to throw at us are the future. We're just about to re-launch a much-enhanced website, and the challenge for us is to make our website and mobile sites the first-stop for anyone interested in restaurants, event-planning and going out generally.