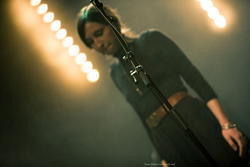 It's a brisk night on Tottenham Court Road, Crossrail's white hoarding and the ghost of the Astoria squatting grimly on the roadside. The house of God isn't everyone's cup of tea when urban life is rubbish, but tonight St Giles in the Field plays host to Alela Diane Menig and her band and is thus a perfect vessel in which to locate some meaning on a Monday.

Alela is small with a sweet mouth that belies its strength and ability to move from melodious haunt to childlike glycerine to warm stone with an easy grace. Unlike other singer-songwriters whose clichéd visitations into the musical and lyrical will pass in time like the quick trickle of sand through a well-worn egg-timer, Menig's creations carry more weight and conjure up a worthy sense of longevity. Singing about mothers, grandmothers and future children, along with the presence of her father in the band, her songs span the tattered lace of history and family, and the collective memory (and future) of these subjects. Additionally she traces a strong path through the Appachalian and folk traditions, evoked through unaccompanied acoustic jewels and alt-country numbers with help from the rest of the band.

Simpler and straighter-laced than the oft-compared Joanna Newsom, her songs nonetheless succeed in stopping time and crafting feeling in the church. The rest of the band help carry the more crooning country melodies, her sultry slide suiting perfectly their cover of Fleetwood Mac's 'Gold Dust Woman'. However, it's during the minimal numbers that the concert really comes into its own, where she is a lone bird without need for embellishment. Songs stand out from her debut album, magic and quiet filling the space during 'White as Diamonds' and 'The Rifle'. 'I'll give her melodies, I'll give her melodies', she sings during 'Oh! My Mama' to a watery-eyed reception, her voice soft as water. Pins drop, brooks bubble; a strong breeze meanders across the mountain.

Image from volume12's photostream under the Creative Commons Licence.