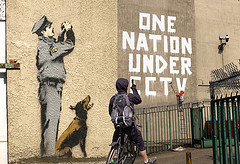 Image courtesy of unusualimage from the Londonist Flickr pool
Britain already has one-fifth of the world's CCTV cameras and an average person in the UK is caught on camera hundreds of times a day. And now, if police get their way, we'll be filmed going in and out of our local pubs.

Nick Gibson is attempting to re-open The Draper's Arms on Barnsbury Street, a former Evening Standard pub of the year winner that shut its doors last August. But to regain a licence, he's been told he must fit CCTV cameras that capture the head and shoulders of everyone entering the pub, and be willing to hand over footage whenever the police ask for it.

Gibson is furious at what he sees as erosion of civil liberties. However, his local MP and the Metropolitan Police keep blithely citing 'public safety'. We find that a bit rich, considering studies have shown CCTV is less effective than increased street lighting at cutting crime, and CCTV footage is used to help solve just 3% of London robberies.

The deputy commissioner of the Information Commissioner's Office weighed in on the debate, saying “use of CCTV must be reasonable and proportionate if we are to maintain public trust and confidence in its deployment”, and even the House of Lords recently warned about the UK's surveillance creep.

So where does this leave us? Islington and Richmond borough councils are enforcing a blanket policy on anyone applying for a licence to sell alcohol, so drinkers there have no escape. Essex police want CCTV cameras on every licenced premises open after 11pm. We know cameras are already up on many pubs and bars, but police and councils are taking away our right to choose. By the way, anyone know how legal this V for Vendetta mask idea is?