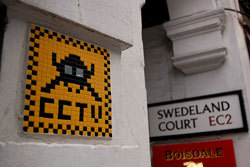 Reassured by the omnipresent CCTV cameras that train their Cyclops vision on London's populace as they go about their business? Neither are we, particularly now that a senior police officer has claimed they don't cut crime

Back in January we reported that London now boasts some 10,000 cameras, and Britain as a whole ranks first in the EU for "endemic surveillance". Yet Detective Chief Inspector Mike Neville says that barely 3% of robberies on the streets of London are solved using these all-seeing eyes, and despite being such a scrutinised society (something Banksy recently alluded to) the images produced aren't really doing much to catch criminals.

It's not the first time the worth of London's cameras has been questioned: last year the Lib Dems asked some probing questions about the arbitrary relationship between CCTV deployment and crime solution rates. Now Inspector Neville has revealed the real reason for such a paltry rate of camera-assisted convictions: the cops can't be bothered to trawl through thousands of often nondescript images, as it's "hard work". Similarly, the cameras themselves are no deterrent: most crims assume they don't work, and the rare chance of being caught only reinforces that notion.

Helpfully, Inspector Neville has a solution. He's heading up a unit that aims to build a database of CCTV images, to track and identify offenders. His team are also planning to put images of suspects on the internet, and even implement software recognition technology that can identify brand logos on clothing. Kids: it's time to start covering up those Kappa and New Era tags.

However, with law-abiding folk seeing CCTV as nothing more than an excuse for a cash-strapped and regulation-loving government to pry into our private lives, slapping silly fines on us for littering or dithering or parking incorrectly, how will the criminal element be convinced to toe the line?

Maybe if their post-mugging mug starts appearing all over their friends' Myspace accounts, they'll get the message.