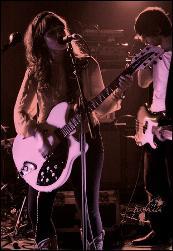 Make way, north London, for the horrendously good-looking and youthful Australian lovelies Howling Bells. You want to hate them but they are good, darn it, so here comes a generous review.

The first and best thing about them has to be coquettish frontwoman Juanita Stein, a sultry siren who flutters her eyelashes and shimmies around the stage, toying with and teasing one and all. Being so achingly beautiful has got to make it pretty easy to win friends in this business, though her grouchy comment in response to a predictably sexist heckle from the crowd suggests it may be a little tiring being able to launch a thousand ships at any given moment. But she doesn't get our sympathy, because she comes across as a smart girl, and because she is good, with a voice that is syrupy and strong at the same time. When she talks the Antipodean is lost and she rasps like an American beauty queen; when she sings it is rusty, slick sweetness; a kick-ass, wised up cherry pie is being baked in there somewhere.

Additionally, the rest of the band haven't exactly been burdened with any unfortunate physical traits, and, much like the manner in which New Young Pony Club and MGMT sucked all the sap out of the music paparazzi for a few months, HBs are set to grace the front pages of the press with their flawless cosmopolitan aesthetic. It helps that they make indie pop that veers to a relatively dark side: stylish and spiky and extremely likeable.

Do the Howling Bells put on a slick live show? They sure do. Do they ever spill over into the spectacular, or move away from the self-conscious? Not quite, though strangely they get nearer to it after some sound problems, when the crowd seem to warm to them and they seem to let go and relax. However, although we could put it down to churlish envy, it does seem hard to really love something that looks so perfect. It makes you want to go and watch something grittier or stranger or homelier - an overweight and ageing Wilco, a wraithlike Newsom or the curious contours of Mr Cave. Rock and roll should be bruised and dirty, right?

All we can pray for is that looks and musical ability are the Bells' only redeeming features. If they are quoting F. Scott Fitzgerald and helping disadvantaged children practise reading in their spare time, we are all doomed.

Image from fuschia's Flickrstream under the Creative Commons Licence.