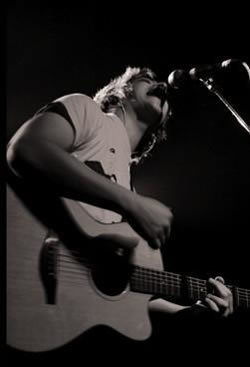 Get Cape. Wear Cape. Fly, taken from his MySpace
It's a sad time for London's music scene this week, as we say goodbye and farewell to the beloved Astoria, soon to be demolished to make way for Crossrail. We've had some great times there, having caught Serj Tankian, The Polyphonic Spree, Fat Freddy's Drop, We Are Scientists, Hot Chip and Alkaline Trio all at the legendary venue. This Wednesday looks set to be the final ever gig at the Astoria with The Demolition Ball playing host to Get Cape. Wear Cape. Fly (pictured right), The Automatic, My Vitriol, Frank Turner, The King Blues, Brigade, VV Brown, Paul Draper and those old favourites "Very Special Guests". Phew. How they're going to fit everyone on through the night is anyone's guess, however tickets are on sale now at a very reasonable £8 each.

Elsewhere, frankly there's not much on. If you like the heavier side of things, Californian melodic hardcore quintet Killing The Dream play Camden Underworld on Tuesday night - tickets are £8.50 each.

Melancholic indie-folk kids Damon and Naomi play the Luminaire on Thursday. Tickets are £7 each, or £9 on the door.

If you want to round out your week dancing at the O2 'till the wee hours, matter plays host to Wonky Pop, with live sets from Mr Hudson, Master Shortie and Esser along with a DJ set from The Times/The South Bank Show Breakthrough Award nominated Friendly Fires

Other than that, it's a very quiet week. Are you going to a gig that we haven't mentioned? Mention it in the comments section below.