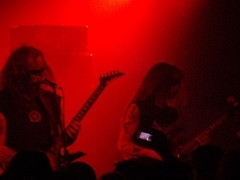 A special two-for-one offer on gig reviews this time. Londonist saw the slightly odd combination of Gorgoroth (old-school Norwegian black metal) at Scala on Wednesday, and former System Of A Down frontman Serj Tankian the next night at the Astoria. Musically they were worlds apart, despite a shared taste for heavy riffs.

Gorgoroth are not a band for the faint-hearted. Once arrested in Poland for a "blasphemous" stage show that included naked women on crucifixes and gallons of blood adorning severed animals' heads, the band is known for its bleak worldview, its harsh and unrelenting sound, its members' brushes with the law (what's a little GBH between friends?), and its ability to protect against trains. This London show was perhaps a final chance to see the band, as lead singer Gaahl and bassist King Ov Hell are involved in a bitter dispute with the band's co-founder Infernus over who exactly has the rights to continue using the name Gorgoroth.

The outcome of the legal battle is uncertain, but this Londonista has to admit to a certain sense of anticlimax at the gig, due mainly to the appalling sound mixing which made it next to impossible for any but the most dedicated fan to tell one song from another. While for many black metal bands, bad production is all part of the aesthetic, Gorgoroth's recent sound on record has been cleaner, while retaining the evil atmosphere; to have everything turn to undifferentiated mush was quite tiresome, to say the least. Still, Gaahl was a mesmerising stage presence; brooding, aggressive and fully corpse-painted up (see the 'Norwegian black metal' section on photographer Peter Beste's site for some great examples), he looked and sounded like some underworld deity as he led the crowd in sweetly unironic chants of "Hail Satan". 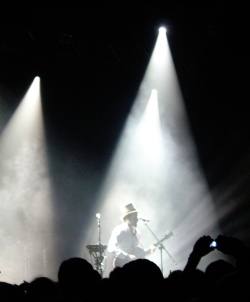 Serj Tankian, the next night, had a similar taste for getting the crowd to chant; his taste was for the equally adolescent "Fuck Bush". But Serj has never been one to shy away from addressing politics (albeit of the earnest and sixth-formerish kind) through music, as his work with

System Of A Down shows. But even the hardest-hearted capitalist would have been won over by the music, thankfully, which was a treat. Londonist went to the gig not having heard Serj's solo album, but if it sounds half as good on record as it did live then we'll be happy.

Retaining the offbeat quirkiness and Armenian/folk influence of SOAD, the set was heavy and lighthearted at the same time, with only the self-consciously zany Praise The Lord And Pass The Ammunition crossing the line from sublime to ridiculous. Although credit should go to the talented backing band who were technically excellent, Serj, wearing a white circus-master suit and a top hat, was the undoubted star of the show, in high spirits and fine voice. His unique vocal style can be a Marmite proposition for the uninitiated, but the fans at the Astoria swooned in awe. Songs from the album Elect the Dead were rounded out with covers of Holiday in Cambodia by the Dead Kennedys and Girl by the Beatles, which was apparently "appropriate" for a gig in London (er, Serj, Liverpool is thataway). A version of Elect the Dead's title track accompanied only by piano was the last song, a melancholy end to an energetic and attacking performance.

On a final metal note, Akercocke and others are playing a benefit at the Underworld on 10 December on behalf of Decapitated (RIP Vitek); tickets available via the Underworld site