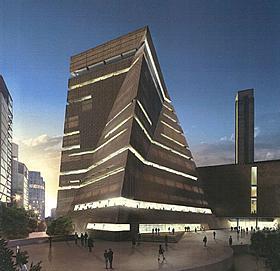 Transforming Tate Modern. Exterior view from the
south at dusk (c) Hayes Davidson and Herzog & de Meuron
As you may know, the Tate Modern's being er, modernised.

Revised plans for the transformation of Tate Modern have been submitted to Southwark Council.

The new plans include a more compact, flexible (recession-friendly?) extension than first proposed; a new route from the Millennium Bridge through the building to Southwark (cool, non?); and most importantly, plans to use those fantastic unique underground oil tanks for "raw spaces for art".

The previous plans for a glass-fronted iceberg-style extension have been replaced with a "brick lattice facade" which will tower over the current, ahem, tower. Swiss architects Herzog & de Meuron think these bricks will sit better alongside Giles Gilbert Scott's original power station; we have to agree. Plus, plans say the building will "glow" through the lattice in the evening; again, sounds like a nice addition to a disused power station extension.

The new blueprints also tick the boxes for energy use and sustainability. The scheme will use 54% less energy, and emit 44% less carbon than building regulations demand, using waste heat from EDFE's relocated transformers and passive design principles wherever possible.

So, why do we need it, and can we afford it? Well, contemporary art tends to need flexible spaces, and the additional space will mean more works can be brought out of storage. Which must be a good thing.

And these numbers sort of speak for themselves: