By NeilA Last edited 152 months ago
NeilA The Saturday Strangeness 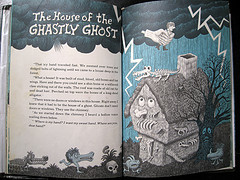 Throughout London's dark history and ghost lore, the case of the Enfield poltergeist remains one of the most bizarre and astonishing. Between 1977 and 1979 this haunting was investigated by one Maurice Grosse who, two years previous had lost his daughter in a crash. He felt that the Enfield mystery was meant for him, but little did he realise just how potent and everlasting the story would remain.

The three-bedroom semi-detached house was was run by single parent Peggy Hodgson, and inhabited by her four children. Eleven-year old Janet was the first to recognise strange utterings in the form of odd knocking noises but such disturbances were considerably minor in comparison to what was about to occur.

Larger objects in the house began to be pushed around, doors slammed, windows opened, loud banging noises reverberated around the home, alarming the children more and more as they intensified. Then, the unknown shifter of objects dealt a violent blow to one of the young children, a small boy, and WPC Caroline Heaps visited the house, and was shocked to see a chair floating in the middle of a room. Then, things became extremely serious as children, particularly young Janet, were attacked in their beds, strangulation was attempted, bed sheets were strewn and Peggy's nine-year old son Billy had a lucky escape when an iron grate crashed onto his bed as he slept, thrown by an invisible assailant.

Despite the serious nature of incidents, many locals believed the 'ghost' to be nothing more than a hoax perpetrated by the family, but the Society of Psychical Research, and leading member Maurice Grosse, suggested something unknown to blame. When Janet, and her sister Margaret began speaking in demonic tongue, the case took a disturbing turn. Pools of water began appearing throughout the house, and in the end more than fifteen separate cases were witnessed by many people.

Why Janet was singled out we'll never know, but investigators believed that it was the spirit of an old man who died in the house which may have caused the torment. His name, a Bill Hobbs from Durant's Park graveyard. Unfortunately for Peggy Hodgson, she had to put up with the awful phenomenon until one day it ceased, never to return, making the Enfield poltergeist one of London's most fascinating yet eerie events.