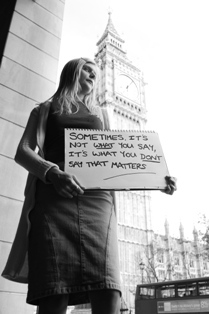 Photo site Someone Once Told Me, the brainchild of journalist Mario Cacciottolo, has been catching the attention of many a curious Londoner as well as web-savvy folks and photography fans from around the world. The Guardian, described it as:

"Whether it was a text message from a mate or words of wisdom from a grandparent. The result is a twisted, modern British version of Bob Dylan's Subterranean Homesick Blues video and throws up lots of intriguing images, stories and sayings"

Sounds worth investigating, so Mario gave Londonist the lowdown on what he's up to.

So what's Someone Once Told Me about then?

Someone Once Told Me (SOTM) is a photography website. People are photographed in black and white with a sketchbook, on which they've written something they've been told, texted, emailed - any type of message passed on to them by family, friends or strangers. It's a kind of 'photography meets storytelling' affair. There's a new image up every day, and there's about 450 in the gallery.

Why did you start it?

I had come to London with nothing, to change my life and career, and had succeeded much quicker than I ever imagined. Once the euphoria died down, I realised I was bored. Plus I had never taken photographs before and was pretty useless at it, so I wanted something to make me practice. And I'm fascinated by people's stories, their pasts, the moments and quirks in their lives that mean something to them. SOTM is a snapshot of a memorable moment in someone's life, and that's always fascinating in one way or another.

What are the plans for the future? How big's it going to get?

There are lots of plans, it just depends on whether the project captures enough interest, or gets 'discovered'. I want to do interactive exhibitions, where people come and look at the best photographs but also contribute their own image, using kit actually provided in the venue or their own cameras. That image would enter the exhibition too, so the whole thing becomes the sum of the parts of its contributors, and is never the same on any two days. Plus I'd like to do a book, and I'd like to get funding by hooking up with a decent brand and travel around the world doing SOTMs in places like New York and Outer Mongolia.

Is it just about London?

No, because people can send in their own images. There are SOTMs submitted from Wasilla in Alaska, where Sarah Palin's from, across America, Colombia, France, Malta - where I'm from - and even one from a roundabout in India that had a goddess statue on it. The site was conceived and created in London, though, and is run here, and most of the images taken so far are from London.

What have been your favourites so far?

Most of them are on the site's Best Of page, it's hard to choose just one. If you're pressing me to name a few names, I like 'Don't Smoke Cigerattes' (spelt that way) 'I Think I Am Pregnant' from a wonderfully bonkers Scotsman, and 'Your Smile Lights Up The World', taken on a Victorian pier in Bangor. An Algerian woman wrote out 'Don't Play With Fire' then set the paper alight, and that image is just superb - because of her, not me. I took 'You Look Like A Lion' the other day, it's not on the site yet, but I think that might be my favourite for a few reasons. There, I chose one after all.

Have you had any weird reactions/moments so far?

I often get people asking what's going on, then volunteering themselves. After shooting 'Don't Play With Fire' in a Shoreditch alley, the sheet of paper wouldn't go out, so this random lad in a hoodie just walked over and poured his beer over the flames. When I was taking 'You Look Like A Lion' in Trafalgar Square I was ganged up on by two security guards who were quite bolshie and demanded to know why I was taking such a photograph. They also told me that there isn't an automatic right to take a picture in the square, ignoring all those snapping around the column. The poor woman I'd just met, who had a beautiful story behind her SOTM, looked on with some amusement as I did battle with the two guards. Mind you, she'd just hung upside down off one of the lions for me, so I don't think she was too bothered by a brief verbal spat.

Who'd be your dream SOTM?

I've got a long wish list, I often see people that I'm sure would be great. I always want people with interesting stories, so anyone from society with a tale to tell. But if we're thinking of famous types, I'd love to get Eric Cantona, he's a hero of mine. I'd also like to get Alan Rickman, Tom Morello, Peter Gabriel, Michelle Obama, Dame Judy Dench. I'd love to get Alan Sugar in that 'You're Fired' pose he does. I'd also like to get a band to do it all at once, maybe The Police or Feeder or Linkin Park. But if I had to choose only one, I'd get the Dalai Lama. I'm keen on Buddhism, and it'd be superb to photograph His Holiness. I'd want to ask him to have 'You Are The Next Dalai Lama' but I don't tell people what to write, so I'd let him choose and just concentrate on not screwing up the photograph.

And where's your SOTM? What would it be?

Haha, well I dislike having my picture taken, so when I came up with the concept of a photography website it never occurred to me that I might actually capture my own image. I might do it one day, back in Malta on the step of my old house. I have a few candidates - 'You're A Bloody Chancer', from the Mayor of Doncaster as I climbed on the back of a tractor with Ed Miliband in the middle of a flooded village, or 'I Used To Sniff Cocaine In A Nightclub Toilets With Osama Bin Laden' from a Lebanese refugee of the last war there. But maybe I'll go for something sensible. An Egyptian man once told me, while we stacked early versions of freeview boxes in a warehouse, 'To Have Peace With The World, You Must Have Peace With Yourself' and I'll never forget that.

And for some general London chat.Where do you live and why do you love it?

I live in Camden and I love it because you meet all types of people, I got one of my tattoos there, it has loads to do and the transport links are superb. But then I turn off into my quiet, tree-lined street where George Orwell used to live, when he was writing my favourite novel of his, and wonder if he ever dreamed the same way that I do. That's where any similarity ends, I hasten to add.

Bar Italia. If I go there any more often they'll start charging me rent. When I walk in the staff tell me what my order will be, because I always have a large mocha with brie and cranberry panini.

I don't drink much, so no, it's been many years since I hurled through alcohol. I have nearly wet myself several times though, because I'm terrible for thinking I'll hold on until l get home. I don't know why. Once I realised I wasn't going to make it, so in a total panic I ran out of the tube, into an alleyway and relieved myself for about 30 seconds flat. That was the last time - now I go before I leave.

So Londonist readers, if someone tall accosts you in London with a camera and a scrapbook, say yes!

Image: Sometimes it's not what you say, it's what you don't say that matters. Someone Once Told Me