A bit of a chilled week here at Londonist Music - we introduced you to Robin Grey, and gave you a magical idea for a Christmas present for that music mad friend of yours. 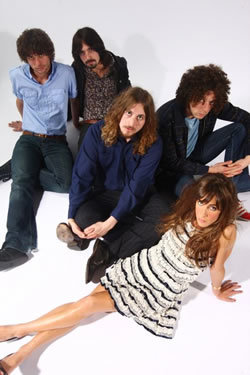 Looking ahead to this week however, and if you are feeling like some classic 80's pop you'll need to pop on over to Hammersmith Apollo on Monday night where The Human League throw back the clocks. Tickets are still on sale at £32 each. Other than that, Duffy and Billy Bragg both play sold out shows at Brixton Academy and Shepherds Bush Empire respectively.

The Zutons grace Hammersmith Apollo on Tuesday night with some feel good Liverpudlian pop rock. Tickets are £21.04 each, presumedly such a strange amount because of the VAT changes. Joan as a Policewoman plays Shepherds Bush Empire - tickets are £16 each.

Kings of Leon and Kooks play sold out shows at the O2 and Brixton Academy respectively on Thursday night, but if you're not going to either and want something that's not sold out maybe check out folky James Yorkston at St Giles's Church in Soho - tickets are £13.50 each. Alternatively, if you want something to wake you up to get you through Friday, Municipal Waste play Camden Underworld with their thrash metal. Tickets are £10 each.

To round out the week, on Friday night there's a whole host of sold out end-of-year shows from the likes of M83 (At St Giles In The Fields), Friendly Fires (at Koko) and Prodigy (at Brixton Academy). If that's not your sort of thing, Electric Six (remember them? Danger, Danger, High Voltage!) play Shepherds Bush Empire - tickets are £12.50 each. If you want a late one, Alphabeat, Sam Sparro and Frankmusic all play Matter at the O2 - tickets are £15 each.

Photo is taken from The Zutons Myspace profile.