Singer song-writers: a rare breed, and when they’re good, a real treasure. Well, we’ve found a new one for you.

Robin Grey has a lovely fresh approach to the folk genre (although he does seem to wear sandals). He cites Cohen and Dylan as influences, but we can hear a definite echo of the late great Harry Chapin, a growling of Tom Waits and a sweet sprinkle of Don Mclean in the mix. He has a honeyed yet clear voice and his lyrics are arresting. Piano and guitar are joined by unexpected riffs on the banjo, ukulele, and assorted percussive things – although his tunes are pleasingly strum-ti-tum, he keeps us guessing as to where he’s going with it. We like. A lot.

He works cheerily out of a blue-doored studio in Hackney and has just brought out his first album, Only the Missile. We caught up with him to get the lowdown:

When did the music start?

My Grandma will quite happily vouch for my enthusiastic nursery school rendition of 'Raindrops Keep Falling On My Head' though I must confess the memory is a little more hazy for me. I guess music has been with me since way back when.

I only began performing my songs with any degree of gumption in the last year or two after spending a healthy amount of time at the back of the stage wielding a double bass with various bands and singer songwriters.

Do the words come first or the music?

Both, sometimes an old poem fits nicely over a riff and other times a new chord progression inspires a mood and words follow. Likewise some songs write themselves in ten minutes whilst some take a year or more to solidify.

What are you up to right now?

I have just finished recording an e.p. with the wonderful Madelaine Hart, to be released on my creative commons label 'modifythevan' next month and am about to start demoing tracks for my next album which will hopefully be recorded in a farm house in Tuscany over Easter and released soon after.

Where do you live in London and why?

I live in a lovely part of Hackney called Shacklewell, sandwiched between Stoke Newington and Dalston. I moved east from Kilburn as the rent was cheap and it was nowhere near a smelly tube line. I don't think I would want to live anywhere else in London after living here for three years, the food, the people and the amount of green space all around make me very happy.

Is London a good place to be for folk musicians?

I think it is a great place for anyone creative – there is so much to be inspired by round every corner.

Working out how to pay the rent without using up all the energy I need for my music was hard at first but now that puzzle is solved I wouldn't want to be anywhere else.

Have you ever busked in London?

I used to busk my classical guitar exam pieces in the tunnel between Kings Cross Thameslink and the tube line when I was in sixth form – once I was over my nerves of busking playing in front of the examiners was far less of a problem.

What’s the best London venue for a folksy gig?

I love any venue where I can perform unamplified and that has cake. My favourite place by far is Iktoms at The Liberties Bar in Camden: I have played there twelve times in the last two years. They have lego to play with, penny sweets, colouring in pens and pencils and I am always blown away by at least one of the acts whenever I am there.

The Magpies Nest in Islington also put on amazing shows and the Betsey Trotwood is always a good place to be serenaded too.

Can you think of an unusual venue that should open itself up for gigs?

I would love do a show on the top of a double decker bus driving around central London, perhaps Londonist can help me make this happen!?!

I often play uke whilst on the 243 and have even managed to lead a sing-a-long or two on occasion.

Who else should we be listening to and why?

Ruth Theodore is an amazing talent who taught me a great deal, her album 'Wormfood' should be heard by everyone with ears.

I shared a stage with 'This Is The Kit' recently, who regularly come over from Paris, and I have nearly worn through the grooves of their brilliant album. I also love Fiona Bevan's work and my good friend Hugh Coltman has just released his debut album which is ace.

Where can we see you playing next and when? 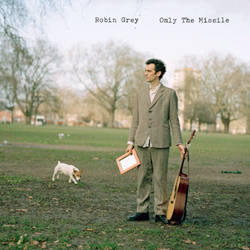 I am currently hibernating until spring – I have quite a few shows lined up for February and March, details of which are on my website.

The carrot cake at Pogo Café in Hackney rocks my world.

Londonist is going to have strong words with Father Christmas: Robin Grey's album better be in our stocking or else the mince pies are off.