By NeilA Last edited 150 months ago
NeilA The Saturday Strangeness 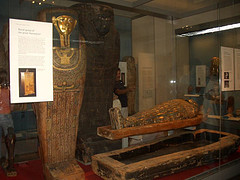 When ancient tombs were disturbed in Egypt, legends of fatal curses spread like wildfire. Whether such dark whispers were true or whether any tragedies surrounding such excavations were mere coincidence, the case of Exhibit 22542 at the British Museum may warn us not to take such sinister rumours lightly.

The item in question is a mummy discovered in the latter part of the 1800s which, over time, harboured such an awful reputation that it was even blamed for the start of the war which broke out in 1914! The Egyptian mummy-case of a singer to the priesthood of Amen-Ra has allegedly caused thirteen deaths, although hardened sceptics would argue otherwise.

The body was shipped to America in the early 1900s and the boat, the Empress of Ireland duly sank at St. Lawrence, and fingers were pointed at the mummy. Then, in 1921 two psychics attempted to exorcise the alleged curse which the object was mystifyingly able to bestow upon whoever should move or even touch it. Legend has it that the two men were able to contact the familiar spirit which was said to act as a guardian to the mummy, and were appalled by its appearance which resembled a floating jellyfish.

Such is the fear instilled in humans by the case and its occupier, that many have claimed simply touching or photographing the mummy will mean misfortune, either death or inexplicable profuse bleeding from unseen wounds whilst in its vicinity.

The power of the mummy throughout Egyptian lore is potent but it must be said that the more such a curse is believed in, the stronger it gets. There has of course never been any evidence to suggest that such exhibits are the cause of death, but dread in relation to such matters is certainly widespread.

Photo by Cap'n Jo under the Creative Commons Attribution licence.