Live Blogging the US Presidential Election 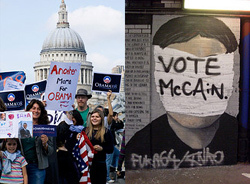 As promised, our American expats Julie Palmer-Hoffman and Chris Osburn cover the US election.

5.16am - And we're spent. Goodnight, London. And thanks for hanging with us this evening (and well into the morning).

5.15am - Notes from the peanut gallery: that was a freaking brilliant speech.

5.11am - Shout-out to the international community.

5.05am - Props to the family, campaign strategists and you the voter!

5.00am - We don't know what we mean when we say this, but cripes does he sound and look presidential.

4.57am - Our first look at the Obamas as the next first family.

4.47am - Holy crap, Gore Vidal is quite possibly the best commentator we've heard from all night. Feisty, cantankerous, and all-out cheeky. The BBC panel don't seem to know what to do with him. Why wasn't he invited in earlier?

4.45am - We could see how it would be problematic if you started drinking at 5am, but if you've just been drinking straight through to 5am, that's perfectly acceptable, we think.

4.31am - President Obama? Here in London the anticipation - and exhaustion - are killing us. Speech, speech, speech!

4.28am - Ciao, McCain. Your speech was gracious, your supporters not so much.

4.22am - Ghostly quiet among the McCain supporters, no? Fair enough. We're aware that as shattered as we would have been had things gone differently tonight, a large number of Americans, some of them close friends and family, will be awaking with a massive political hangover tomorrow and the conviction that the country is headed in the wrong direction. Here's hoping the sentiment doesn't last.

4.18am - Ah, sweet sweet concession speech (*reflecting the views of your Londonist live bloggers for the evening and not necessarily Londonist as a whole).

4.09am - Interesting point about the international community, that the "sea change" expectation may be stronger outside of America than within.

4.00am - OBAMA DECLARED THE NEXT PRESIDENT.

3.53am - American expats! How do you feel about living outside of the States as you watch the results come in? A wee twinge of regret that you're not among the throngs of your compatriots? Grateful to have had the buffer of an ocean between you and the many election ads? A bit of both? Something else entirely?

3.45am - 15 minutes until the West Coast polls close, and the countdown clock is up and running again. A McCain concession speech may follow soon after. We're misty-eyed here at Londonist Towers - but whether that's due to pure exhaustion or other causes - we're not saying.

3.40am - Nancy Pelosi speechifying. The beginning of the end?

3.28am - The phrase "concession speech" has just entered the Beeb's lexicon for the first time tonight.

3.11am - BBC correspondent asks Colorado Republican whether McCain can still win. 'The presidency?' asks the Coloradan. No, the lottery, dude. What the hell else do you think the BBC wanted to talk about?

3.05am - Delirium has officially set in. Silly impressions have taken over the dialogue at Londonist HQ. Be happy we're not live video-blogging this. Tina Fey we are not.

3.01am - You heard it here first: One of our members has just called the race for Obama. This should be taken with a grain of salt, however, as our armchair pundit was napping for half an hour prior to making this pronouncement.

3.00am - Another countdown! We fail to muster the same decibel-level cheer as heard at the Gramophone. Four more states close.

2.51am - The BBC are turning reflective, and so will we. Did we mention the make-up of the spectators at the Gramophone tonight? Your Londonist bloggers disagree: one thinks majority British, the other thinks majority American. So we'll reach across the aisle for a compromise and call it pretty evenly split. As American expats, it's always humbling to observe how much attention the rest of the world pays to the US, when the US so infrequently seems to return the favour in directing its attention outward.

2.39am - Pundits are taunting David Dimbleby to call the election after New Mexico goes to Obama. We believe the word 'wuss' was used.

2.30am - 'If you believe in the tooth fairy, [McCain] could win California.' Chuckle chuckle.

2.25am - And now we're being told that we should know within a couple hours who the next president of the United States will be. Could there be sleep in Londonist's future tonight?

2.24am - BBC is also projecting an Obama win for Ohio. Pundits are predicting between 330 and 360 electoral votes.

2.20am - Can we please declare a moratorium on the word "maverick" after tomorrow?

2.00am - Obama takes Minnesota: "wonderful state of lakes and forests."

1.52am - Yeah, so we bailed on the Gramophone, overcome by the need for munchies and the hope that we might yet regain feeling in our rear ends. Also forfeited our seats in favour of a run to the loo. Thank god for the loo. When we left, the group of spectators seated on the floor in front of us had sprawled out on their backs. The only thing missing: popcorn.

1.20am - Londonistas heading back to Londonist headquarters. Be back shortly!

1.12am - We're hearing rumblings of "landslide" among our neighbours. A bit early to call this thing, we think.

1.01am - Oh crap, the projector just went out. We have no telly. I think there might be riots. (The liberals in the room suspect a Republican conspiracy.)

1.00am - The big potato is projected for Obama!

12.46am - "Eight Days a Week" playing at McCain headquarters in AZ? Explanation please?

12.40am - Ha, did you hear Hitchens say that Palin can't tell the difference between Sarkozy and Inspector Cloiseau? Oh Hitch. (yeah, that actually happened 10 minutes ago. We're just that Blackberry challenged)

12.33am - We love it! The guys next to us have color-your-own electoral maps. Vermont's been coloured blue, Kentucky red. Maybe we can borrow the markers later to draw moustaches on our unsuspecting napping companions.

12.30am - And another countdown as 3 more states close. No projection yet - a bit anticlimactic.

12.14am - Republican analyst on the Beeb: I think it's safe to say the crowd no like.

12.00am - Shit, is it New Year's? Crowd just counted down the remaining seconds until the first 6 state polls closed.

11.46pm - Alright folks, 15 minutes till the first batch of polls close and this Londonista has already lost feeling in her feet. Party atmosphere reigns. Massive cheers with every Obama spotting on the screen, appreciative applause for Hillary, big boos for McCain and Rupert Murdoch, biggest boos for Sarah Palin.

11.20pm - Loud booing at mention of McCain on TV. If there are any non-Obama supporters in this pub, they're keeping their opinions to themselves.

10.25pm - At Gramophone. Standing room only. Londonistas slipped to the front craning their necks to view Beeb news on the big screen. But now how do we get drinks or get to the loo?

9.26pm - Greetings Londonist readers! We're headed out to Gramophone here in a bit. Still a few hours before early results start rolling out, and cripes, we already need a nap. But first Londonista to fall asleep goes to work tomorrow with a permanent marker moustache. We'll be back in a bit to bring you the scene as we see it. In the meantime, we want to hear what you're up to throughout the night. Leave comments and let us know what the view looks like wherever you may be!

8.45pm - revving up for a long night and checking out the New York Times' Reader Photos from the Polls