By Hazel Last edited 171 months ago
Hazel Extinct Entertainments No. 3 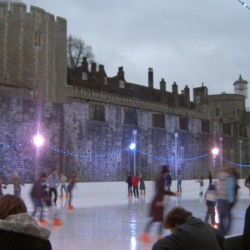 We are proud to bring you a constant stream of the best and brightest entertainment news each day... but we are also proud of our reports on London past. In this series, we join up our talents and take a look at London entertainments that no longer exist, and the closest equivalent available today.

Well, frozen water anyway. And not just any old water, but the Thames, at one of six Frost Fairs held between Temple and Southwark over a period of 260 years. Once upon a time the river used to freeze over, prompting north-south bonding and eventually a regular commercial event. The first Frost Fair was in 1564, attended by none other than Queen Elizabeth I, who witnessed archery, ox roasting, dancing and no doubt, lots of slipping. By the fair of 1683 the magnitude of stalls meant they were arranged into ‘streets’, and King Charles II even paid a visit. A hand-printed ‘memento’ of this event is on display at the Museum of London. Fast-forward to 1813 and the frozen Thames around Blackfriars Bridge supported a mall of stalls and shops dubbed ‘City Road’. By then it cost 2d and 3d to enter – charged by quick-thinking Watermen who dug channels in the ice by the banks, so that the general public couldn’t enter without their assistance. Cheeky buggers.

Where are they now?

It took rare meteorological conditions for the Thames to go solid even in days of yore, not to mention a less flowing river than exists today (the demolition of old London Bridge in 1831 probably marked the end of Frost Fairs.) There is still plenty of opportunity to walk on frozen water at any number of outdoor Christmas ice-skating rinks. A visit to the Tower of London, pictured, promises at least close proximity to the once solid Thames. But in terms of atmosphere, the combination of food stalls, merriment and frozen water at the Natural History Museum rink provide the best modern equivalent - but bring your imagination.

Words and picture by Tim Benzie