16 artists are being nurtured by the Southbank Centre as Emerging Artists in Residence in what they're styling an "eclectic hub for music and performance". Keeping you ahead of the curve, we're getting closer to this multi-talented bunch of singer-songwriters, rappers, MCs and beatboxers, spoken word artists and DJs in a series of interviews. 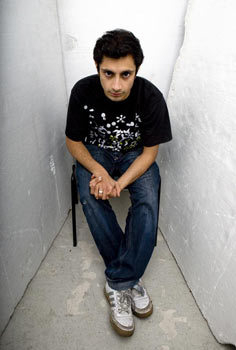 Who are you and what do you do?

I'm Riz Ahmed aka Riz MC. I'm an actor (you're probably thinking he looks familiar... recently seen zombie fighting in "Dead Set", a lot hairier in Winterbottom's "The Road to Guantanamo" and soon to be seen starring in "Shifty", a micro-budgeted indie film about a Muslim crack dealer - Ed). and I make music.

Where do you live and what do you like about it?

I live in Wembley. I like that it's the most unlikely place to have a national stadium, and the way that any new immigrant wave hits us first. The whole feel changes every five years. Also, cheap home cooked food from around the world on your doorstep.

What inspires you about London? What's your favourite bit?

The Southbank. Just the view of the skyline, being by the river, the phenomenal concentration of creativity there, the way it's a pedestrianised hub of art and passers-by. LA or New York don't have anything like it. It's a publicly funded, communal space, full of cutting edge culture - a combination unique to this city in lots of ways. It encapsulates a lot of what this city means to me by way of inspiration. Becoming an Emerging Artist in Residence at the Southbank Centre has just made me even more biased.

How much time do you spend at the Southbank Centre? Have you found any secret bits?

It's my only unofficial office space. I go there to write all the time. There's some crazy untapped spots there! There's a half underground, half outdoor space under the Queen Elizabeth Hall, behind the skateboarding bit. I'm pushing to get it opened as a live music venue this time next year. Fingers crossed!

What does the EAR programme mean to you?

It's meant a close knit collective of supportive, inspirational talent that I have drawn upon for advice, creative collaboration, and good company. It's important as a platform for free new music in this prestigious institution. We're the bridge between austere expensive programming and the new emerging talent in London.

What do you hope to achieve through it?

I want to make the Southbank Centre a hub for new music on a par with Camden, Brixton, and Hoxton. We're not there yet, but I'll be working closely with SBC over the next year to set up a dedicated programme. This has just been the first phase, and it's been about us more than opening it up to non EAR talent. But that's cool as well. Not just for us to get to play here, which has been amazing but it's cool for this space to have a place for such a diverse group of musicians. It sends a message to the public. When they come and see us for free here, they think, "maybe this place is for me after all".

I guess I also just hope to maintain a link with this place professionally, since it means so much to me personally, like I said it's one of my favourite spots in the city.

People Like People
What was your first place to perform in London and where do you aspire to perform?

First two places in London were, I think, Cargo for the Battlescars MC battle, and Yoyo, for the Bombay Bronx battle. Both terrifying. Have played both dozens of times since, and now feels like home, as far as London venues go. I just ticked two places I've always wanted to play off the list: Wembley Arena, which was surreal as an event, something for the 2012 Olympics, but very cool to play near my home and in such a big venue. Playing the Royal Festival Hall with Massive Attack was a dream come true. I want to play the Roundhouse main stage next, and Shepherd's Bush Empire.

Who in your genre should we be watching/listening to and why?

Watch for Durrty Goodz, because he is the most versatile and compelling MC in the world, listen to Zero dB because their last album and their remix album is what beats should be, and check for Polar Bear because he is a master of the spoken word art form.

A successful album or two.

Have you ever busked? Would you ever?

No, but on the bus. Top deck at the back. It ran all the way down to the front. If you were on that bus, I'm sorry.

Riz MC's single Radar is out now. Listen up and find out about gigs on his MySpace.

Check out other EAR interviews.