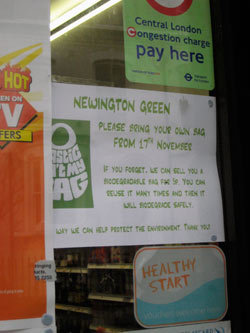 Disappointment of the day comes from London Councils who have withdrawn the ban the shopping bag Bill which received so much support from Londoners. Instead, they hope that the government's Climate Change Bill will have a bigger environmental impact, encouraging a voluntary reduction in plastic bag usage nationally, hitting retailers with charges, whereas London Council's Bill could only ever be about London.

However, local action like that of Newington Green Action Group, which has distributed posters to all local shops with the intention of becoming the first plastic bag free area in London is definitely changing habits. The hugely popular greengrocer's on Newington Green Road has eliminated all free plastic bags and now charges 5p for a biodegradeable, reusable bag. However, the steady stream of loyal customers tend to be brandishing cloth tote bags these days.

What's is it like where you are? Is there a groundswell of greenie bag action going on? Let us know.