Art Review: In Bed with The Girls

By chloeg Last edited 166 months ago
chloeg Art Review: In Bed with The Girls 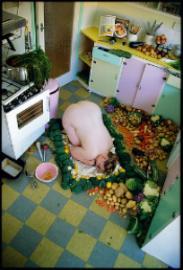 Beverley Knowles Fine Art in Notting Hill is a small and beautifully formed space dedicated to providing a platform for contemporary British female artists. For the next month you can view an exhibition by Andrea Blood and Zoe Sinclair, otherwise known as The Girls.

The work is made up of surreal, staged 'self portraits' featuring a variety of content - the artists as Prince William and Harry, looking like a French and Saunders piss-take; the comic 'Friday (Mermaid)' of a gluttoneous sea creature stuffing fish and chips in the bath, flicking her tail; the disturbing Barbara Cartland with powder pink hair and dress, the face caked with mask-like white make-up.

It feels inaccurate to call the shots self-portraits, as the artists are so clearly parodying and embodying somebody, and something else. Many of the photographs play on feminine stereotypes - the cartoon sex symbol Smurfette is represented by the artist, her body covered in blue paint with the addition of exaggerated conical breasts. In a similar way to the 'Hung up On You' Madonna shots, the eroticism of the original is downgraded to an amateur version - no fantasy cartoon, airbrushing or location shots, instead the womanly pear-shaped curves of the artists bodies, the background of a London high-rise or the touching normality of a seaside resort. It reveals a different kind of reality behind sex-symbols, the other lives and shapes of females.

Other themes and symbols are explored in the exhibition, such as pop culture, Englishness and the relationship between women and food. The result is sometimes attractive, sometimes disturbing and sometimes humorous, such as 'Cornfed', set in the traditional womanly setting of a kitchen with the artist folded and basted on a giant foil base, surrounded by vegetables. Some of the photos are good enough to eat, but they sufficiently highlight some of the less palatable issues about the place of women in visual culture.

Image of 'Cornfed' by The Girls. 'In Bed With The Girls' is now on until Saturday 1 November 2008, and entry is free. The gallery is open Tuesday – Saturday, 11am – 6pm. Beverley Knowles Fine Art, 88 Bevington Road, London, W10 5TW. The nearest tube is Ladbroke Grove.