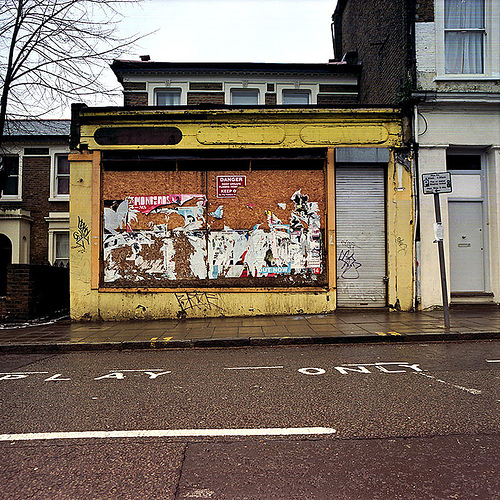 When is a Londonist not a Londonist? This is of course a trick question dear reader – we never take our Londonist badges off. Even when we’re not conspicuously blogging, we crowd around the fire at Camp Londonist and tell tales of London of yore, or weave tales of London to come. And one theme that constantly sneaks into our conversations, and has us waking in a cold sweat in the wee small hours, is the future of the corner shop. The demise of traditional high-streeted business. For in truth the small shop and the independent trader are a powerful nexus to the community, witnessing what has gone before and with fingers on the pulse of what is to come.

When we learnt of a new exhibition at the Museum of London called Shutting up Shop, and a new book of the same name, we were galvanized into action. It would be Londonist’s job to seek out the independent traders of today’s London. And have a chat with them. So we have charged our good friend the shopkeeper with chronicling modern high street life. Of which more in the very near future.

In the meantime, about that exhibition… It is the work of John Londei, an acclaimed and by all accounts busy commercial photographer. This particular series of photos were taken in the 1970s and 1980s across the UK, and records “an aspect of urban life which has now sadly all but disappeared”. The photographer promised the subjects of his work that he would one day make them into a book, but when he went to revisit the premises in 2004, many of them had indeed ‘shut up shop’. The photos are large-scale, and were taken on a 10” x 8” plate camera, which will probably mean more to our flickr friends than it does to Londonist. The exhibition runs from 2nd October – 23rd November 2008. Your corner shop will of course run for just as long as you keep shopping there.