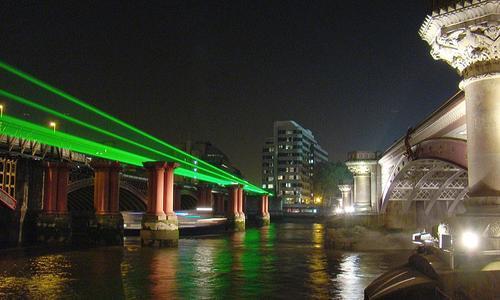 Drift 08 is awfully appealing as an idea, linking the concepts of drifting down a river with the currently fashionable notion of the drift in a psycho geographical sense meaning to wander the streets. Installation art is meant to either inform the viewer about its location or shock viewers into seeing it in a different way. In theory this should have been a treat, a conversation with the location not just an entertainment.

It’s not that the work is necessarily bad: Margaret Evangeline’s Saved from Drowning is lovely and clever. Neither are the ideas poor: Julien Berthier’s love-love is amusing. And not all of them fail to utilize the space given: Keith Bowler’s Ghost Bridge on the supports of the old Blackfriars Railway crossing interacts with the area but isn’t actually very good, because whichever way you view it, it’s just some green lasers across the river. The soundscape of seagulls on Millennium Bridge would have been a cute idea on a canal in Birmingham but, ahem, we have sea gulls in London many of whom were nesting on Elizabeth Russell’s Thames barge by Tower Bridge. At least her work bears some relationship to the river it’s on but we’ve already got barges on the river and like the cutesy and pointless feast of skulls this extra one doesn’t add anything to our understanding of the Thames or London.

This is the best city for art in the world, with the most artists per square foot on the planet, and yet this work could have been placed in any river in the UK. It’s just not good enough, the curators clearly don’t know what they are doing, have chosen and placed work badly and it won’t matter if the promised monsters under London Bridge never show because, let’s face it, there are no shortage of them about in this town... some of them doling out the art dollar with little discrimination.

Image courtesy of helen.2006 from the Londonist Flickr photo pool.

Drift 08 at various locations along the Thames, until 19 October. For more information, go to the Illuminate website.