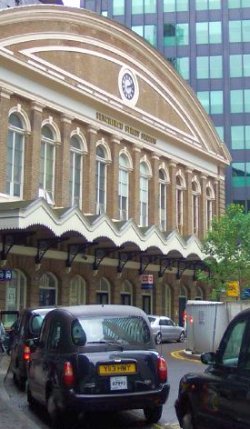 Tuesday – 9th September 1960: Hugh John Mungo Grant is born in Hammersmith. He would become a well-recognised film actor and producer. Wednesday – 10th September 1973: IRA bombs explode at King’s Cross and Euston mainline stations, injuring 13 people. Witnesses describe a teenager planting the first bomb by throwing it into the crowded ticket hall at King’s Cross. Thursday – 11th September 1980: Armed robbers steal almost £1.5m worth of diamonds from a jewellery shop in Knightsbridge. The haul includes a famous stone known as the Marlborough Diamond, worth £400,000. The robbers are arrested 11 hours later. Friday – 12th September 2005: The England cricket team beat Australia at The Oval, winning the Ashes for the first time since 1987.

A broken heart is a very pleasant complaint for a man in London if he has a comfortable income.

The early autumn is set to continue, with moderate wind and rain that might (if we’re lucky) be occasionally punctuated by the odd burst of sunshine.