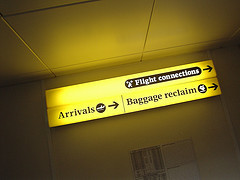 Being Mayor of London has its perks. If your family have a crappy time getting home from holiday, caught up in the purgatory of Gatwick baggage reclaim and – despite your eminent public standing and instantly recognisable blond moptop – being helpless to do anything about it then at least you have the comfort of spilling your literary aspirational guts about it in the Telegraph and tacking on a bit of transport policy too, mooting the need for "a new and more eco-friendly international airport at a site in the Thames estuary."

Happily, the Thames Estuary Airport Company has already done a great deal of work on a proposal for a new airport just off the coast of the Isle of Sheppey. MARINAIR would be a radical solution to the south-east's airport capacity problems linked to Central London by underground rail links and hooked up to the Eurostar. Despite the dowdy website, the idea is inspiring and, of course, presented here as a no problem, eco-friendly option with all funding for its development already in place from private commitments, just awaiting the magic wand wave of government, but let's not entirely suspend our disbelief here. We'll be watching out for Boris' feasibility study with great interest.

Alternatives are, of course, the much contested Heathrow third runway and expansion at London City, although the latter was rather contingent on getting the go ahead for improved access to the airport via the Thames Gateway Bridge whose fate was deferred by government following a public inquiry . This is also the project around which Boris curried favour in East London for nominally opposing. City Airport's fate is also, now, on hold.

But if we're getting into dramatic and imaginative transport thinking, Mr Johnson, how about our Thames Gateway cable cars please?