So... Who Won The World Gay Footie?

By Craigie_B Last edited 161 months ago
Craigie_B So... Who Won The World Gay Footie? 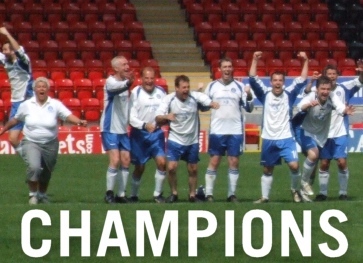 You may remember that we previewed the 2008 World Gay Football Championships, which took place over the last week in Regent's Park. We're happy to report that our very own Leftfooters FC organised the tournament, which seemed to embody the best of British - fun, sporting achievement, fair play, and a sense of community.

Forty teams of men and women competed in three Leagues for six days, watched over by 56 referees. Today the finals were held in the sunshine at Leyton Orient's excellent stadium. Everything reached a heady climax this evening at a lavish celebrity-rammed* closing ceremony with trophies galore under the arches of Vauxhall rail station.

This Londonista walked in to the ceremony to grab a cider and black, just as the Pink Singers were busy belting out a medley to build up to the trophies. Here's your guide to who won what:

Men's Division 1 champions - London's own Stonewall Lions knocked last year's hosts Argentina into a topped hat with an impressive 5-0 victory (over the whole tournament Stonewall scored 43 goals and conceded none).

Men's Division 2 champions - Leicester Wildecats eventually scraped through to win after a dramatic 3-3 draw, going 2 penalties down in the shoot-out, and just pulling through during sudden death.

Women's champions -  Hackney WFC cruised to victory after playing, at points, up to four matches a day against strong teams from South Africa and the US

Top Scorer - Jose from Mexico, who seemed a little over-awed and excited, also with credits to David Ellard from Stonewall Lions and a woman from South Africa who had already headed home ("are you all sure they've gone and aren't at the back? they're very small!")

So overall, it was an English 1-2-3, with our teams coming top in each league. The Leftfooters were clearly too busy organising the event, however, to do that well themselves on the pitch. As the night finished, drunken Thank You's were gibbered from the stage to the tea-makers, volunteers, referees and the red cross - and there was even one ironic "Thanks To My Mum For Making Me Gay". All headed straight to the bar to reunite with their WAGs, discuss dodgy referee decisions, and worry about how there will be no 'unlimited substitution' rules next year. In the words of top scorer Jose, "Muchas Gracias a Londres". Next stop, Washington DC.

* Well, celebrities were limited to Peter Tatchell and the London order of the Sisters of Perpetual Indulgence. It wasn't the BAFTAs.